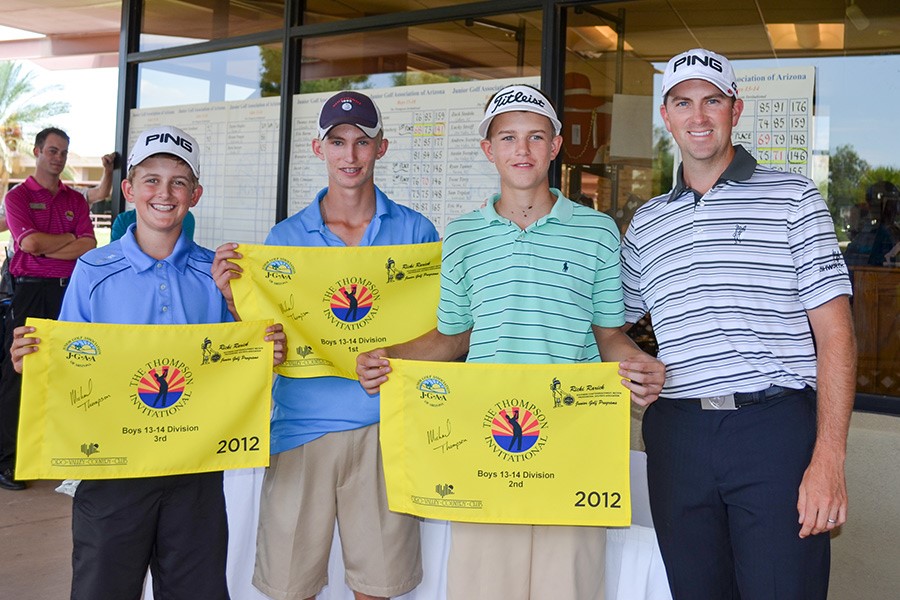 Three former Junior Golf Association of Arizona (JGAA) members recently posted collegiate golf wins within days of each other. Trevor Werbylo earned a share of the individual and team titles at The Prestige held February 15-17 while Michael Feagles won both titles at the Mobile Bay Intercollegiate contested Feb. 14-16. And Gavin Cohen prevailed in a playoff at the Nick Watney Invitational Feb 8-9.

Werbylo, a senior at University of Arizona, got up-and-down on the final two holes to tie for first for the individual and team championships at The Prestige, contested on PGA West’s Greg Norman Course.

“I played solid all day,” he said following a gusty final day. “Made a few mistakes, but kept reminding myself to stay patient with the wind and where some of the pins were. It was tricky, so I stayed patient, and in the last two holes, had a couple great up-and-downs. It was fun to come down to the last hole with a chance to win individually, then also as a team, and get it done, it’s definitely satisfying.”

Tucson native and 2017 grad at Salpointe Catholic High School, he first entered the JGAA Boys 11-10 age division in 2010, and slowly ramped up appearances leading to breakthrough years in 2015 and 2016 when he won twice along with six other top-10 finishes that year. Werbylo followed up the next year with two more wins, including the Wigwam Invitational, one of the first PING Junior Masters Series tournaments.

“I just tried to make the best decision I could,” Feagles said at the time in an interview with 247Sports.com. “To go back to a great university, finish out there, the way I want to. Pro golf is still going to be there. After a while, it seemed like a no-brainer.”

To illustrate the alteration of Feagles’ trajectory: Back in 2015 he finished in ninth place sandwiched between Viktor Hovland at T7 and Matthew Wolff, T10, at the Thunderbird International Junior hosted at Grayhawk Golf Club.

The Brophy Bronco went on to help the Illini reach the NCAA semifinals for the 2016-2017 season, earning 2017 Big Ten Freshman of the Year honors. The team’s No. 1 golfer, Feagles played a key role in Illinois’ Big Ten Golf Championship dominance. They owned the top spot every year, except one, since 2009.

A JGAA member from 2008 to 2015 with 60 events entered, he notched his first win in the 10 and Under division, on his way to seven more. Feagles wrapped up JGAA competition in 2015 with 4 of 4 top-10s. That same year, he earned recognition as AJGA All-American Honorable Mention.

In junior and high school golf, Cohen logged more than 50 JGAA events from 2009 to 2017, earned 2016 AJGA Scholastic Honor Roll honors, and captured the individual state championship as a senior while leading Catalina Foothills to the team title. He then moved on to play college golf his freshman year for UA, 2017-18 season. He competed in six events, entered the starting lineup for the last three tournaments, and fired a final round 69 in the Pac-12 Championships.

Cohen then transferred to Southern California’s Loyal Marymount University where he recently led the team to a school-record-low score as well as earning the individual title at the Nick Watney Invitational. The Lions finished 11-under on the final day, Feb. 9, 28-under par for the tournament, topping the previous best mark of 23-under par to finish three strokes off the pace set by BYU. Taking the individual title with a birdie in a playoff, Cohen shot career-low 54-hole 203, which included a bogeyless final round. The senior’s 203 tied for the second-best individual performance in Lions’ history, one stroke shy of the record.

“In case anyone is wondering about the ongoing efforts to make the JGAA one of the best junior golf organizations in the country, this picture says it all,” said Alex Clark, Chairman of the Board of the JGAA, referring to a 2012 image featuring Cohen, Feagles and Werbylo accepting trophies next to Michael Thompson, two-time PGA TOUR winner, Tucson native and founder of the JGAA’s Thompson Invitational. “These young men all won three separate collegiate golf tournaments days apart against strong fields around the country. Winning is difficult in golf and doesn’t happen very often. Congratulations to them, and thank you to everyone, especially people like Michael Thompson, Bryce Molder, Warren Schutte, Jeff Fisher, Stacey Bryan, The Thunderbirds, Scott McNevin, Cori Matheson and many others. We should all be proud, and please keep up the good work.”