By Golf EditorJuly 9, 2020No Comments 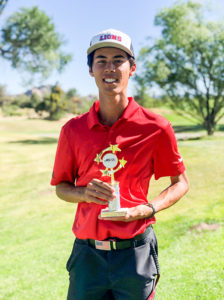 Riley made the most of home-field advantage, posting a first round 5-under-par 66, which included three birdies and an eagle, on the North Course to open up a five-stroke lead going into the final round. He finished with a 3-under-par 69 on the South Course to win the event by eight strokes at 8-under-par 135. His second round featured an eagle-birdie start on the first two holes, which he temporarily gave back on the next two holes, before closing out the competition with birdies on 12, 13, 14 and 17.

“It was really cool being from Prescott and winning here,” said Lewis, who is set to play golf for Loyola Marymount University in the fall. “I think it was a lot easier since I’ve played this course plenty of times. The wind made it tough, but I ended up managing the last few holes. Good thing I live up here.”

Alan Quezada of Phoenix came in second place with rounds of 72-71 to end up at even-par 143. Two players – Avery Lazarski of Las Vegas and Carlos Astiazaran of Tucson – both fired a pair of 72s to finish tied for third place at 1-over-par 144.

In the Girls Championship division, Ashley Menne of Surprise cruised to victory by a healthy nine-stroke margin to capture her second Prescott City Junior Championship. Her wire-to-wire win began with a first round 1-under-par 70, three strokes clear of Emily Shimkus of Cave Creek, and ended with a spectacular 6-under-par 66 to finish the tournament and 7-under 136. Bound for ASU in the fall, Menne took control early in the second round after birdies on holes 2, 4, 9 and 12. She then carded two bogeys on 13 and 14 before making it all back, and then some, with a birdie on 15, eagle on 17 and another birdie on 18. Shimkus put up a solid even-par 72 on top of her first round 73 to finish in solo-second place at 2-over-par 145. Makenzie Cooper of Litchfield Park came in third place at 8-over-par 151 (76-75).

“It felt like a really good, deserved win after practicing these last couple weeks really hard,” said Hill. “It was hard to battle in the wind, and overall, I’m just ecstatic at how I played.”

Hill topped his first round 4-over 75 with a 1-under 71 in the second that included an eagle on the first hole en route to a 2-under front nine. He managed to hold it together under the gusty conditions to shoot 1-over on the back nine for the win. Gregory Jackson Jr. of Prescott finished in third place in the Boys 15-18 division, five strokes behind Hill. And Kaylin Johnson of Geneva, Illinois won the Girls 15-18 division at 9-over-par 152, after rounds of 73-79.