Raina Ports Wins The Thompson Invitational at Home in a Playoff

By Golf EditorSeptember 28, 2020No Comments 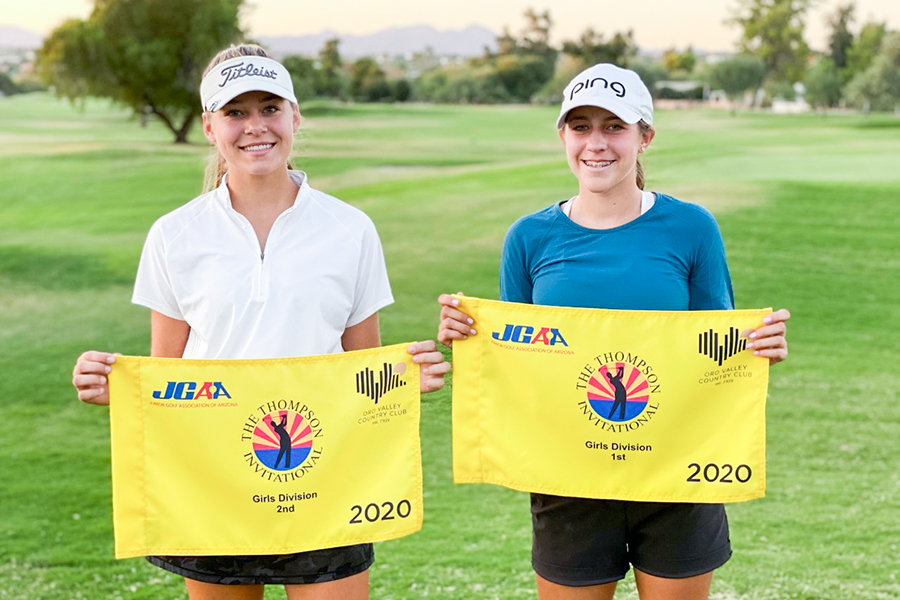 The 2020 Thompson Invitational kicked off September 26-27 at Oro Valley Country Club with 77 boys and girls competing for top honors. After regulation play, the Girls Championship division ended in a three-way tie. Reagan Capizzi of Scottsdale shot a first-round 73 to open a one-stroke lead over Raina Ports of Oro Valley. Capizzi followed in the second round with a 78, Ports with a 77, to finish the championship tied for first place at 7-over-par 151. They were joined by Zoe Newell of Oro Valley – who started four strokes back – after rounds of 77-74. All three players made par on the first playoff hole, before Ports closed the door with a birdie-3 on the second extra hole, No. 9. Marley Moncada of Tucson came in fourth place at 9-over-par 153 (76-77).

After the first round on the boys side, leader Dallin Delgado fired a 69 while four additional players were tied for 2nd with a 1-under 71. Eventual Champion Vincent Cervantes of Chandler, who shot a 73 in the first round, pulled ahead in the final round with a 3-under-par 69. His dominance of the two back-nine par 5s both days made the difference, going five-under for those four holes alone.

Cervantes’ 2-under 142 finish for the championship lead by one stroke over Camden Braidech (71-72) of Scottsdale who gave chase down the stretch with an incredible four-straight birdies to finish in second place at 1-under-par 143. Tied for third place – Max Krueger (73-71) of Tucson, Prescott’s Trevor Lewis (71-73) and Trevor Grenier (71-71) of Gilbert – finished two strokes off the pace at even-par 144.

Michael Thompson, a Tucson native, grew up playing in the Ricki Rarick Junior Golf program, Southwest Section PGA events and JGAA tournaments from 2000-2003. He was a member of the 2001 Eddie Hogan Cup team representing Arizona, where he finished third individually. Thompson played collegiate golf at the University of Tulane before transferring to the University of Alabama. In 2008, Thompson was named the SEC Player of the Year and shortly after turned professional. In 2013, he won his first PGA TOUR event at the Honda Classic and his second at the 3M Open July 2020.