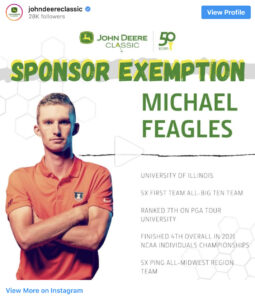 On the heels of his fifth year at the University of Illinois, former JGAA member Michael Feagles received a sponsor exemption to play in the John Deere Classic, July 8-11.

Once a Brophy Bronco, Feagles made an immediate impact for the Fighting Illini by helping the team reach the NCAA semifinals in the 2016-2017 season. Along the way he earned 2017 Big Ten Freshman of the Year honors for his contribution. Recently, he led Illinois “back home” to the college golf championships at Grayhawk Golf Club, making it to the team quarterfinals after finishing in fourth place individually.

The Scottsdale native enters his first professional tournament on a course he knows well:  TPC Deere Run, located in Silvis, Illinois. Ranked 7th in PGA TOUR University, and already a member of the Canada’s Forme Tour, Feagles certainly has the skills to compete at the highest level. This season he posted lowest single-season stroke average in Illinois school history (70.55), and he is five-time member of both the All-Big Ten and PING All-Midwest teams.

Feagles’ collegiate accolades are no surprise given his junior amateur career. He was a member of the JGAA from 2008 to 2015 with 60 events entered. Feagles started out in the 10 and Under division where he notched his first win. On his way to seven more, Feagles wrapped up JGAA competition in 2015 on a high note by making 4 of 4 top-10s, with a second-place finish at AM&E Classic Presented by Bryce Molder and T3 at Charlie Beljan Invitational.

Feagles earned AJGA All-American Honorable Mention due to solid play at the AJGA TPC-Southwind and second place at the AJGA Heather Farr Classic. He finished strong at the coveted Thunderbird International Junior, also held at Grayhawk Golf Club, where he managed to finish in ninth place in 2015 sandwiched between Viktor Hovland at T7 and Matthew Wolff at T10.

Congratulation from everyone at the JGAA.