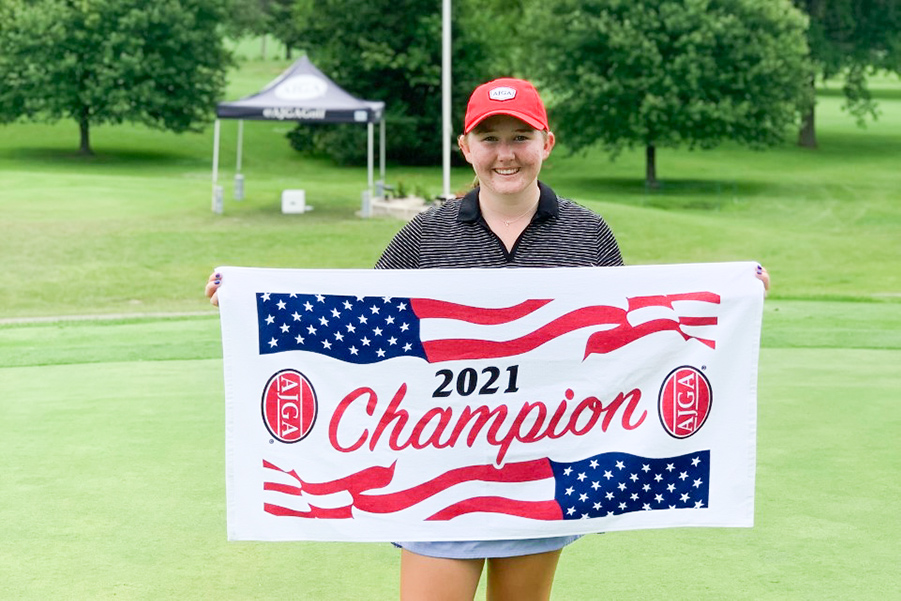 Peoria’s Mattison Frick shot rounds of 70-72-71—213 at Illinois’ Pekin Country Club July 12-15 to win her first AJGA tournament:  D.A. Points Junior Open. She finished at 3-under par, one stroke ahead of Faith Johnson of Indiana, who nearly caught Frick after firing a sizzling final-round 7-under 65.

Her sixth AJGA start, Frick’s win came on the heels of recent solid play resulting in a third place finish in June at the 2021 AJGA Tucson Junior presented by Hilgers Orthodontics. At the post-championship interview, the growth of Frick’s game even impressed her.

“It’s crazy to think that just over a year ago I played in one of my first (AJGA events) down in Texas and I was nowhere close,” said Frick. “So to think that I’ve come all this way is super awesome!”

After starting the first three holes of the tournament bogey, eagle, double bogey, Frick settled in to shot a steady 1-under-par total for the tournament on the front nine and a 2-under total on the back nine, including a birdie each day on the par-5 16th hole.

In JGAA competition, Frick notched top-10s in all four PING Junior Masters Series tournaments she entered in 2021, with her best finish, T2, at the Bryce Molder Invitational. In 2020 Frick earned three wins, including the Antigua Milt Coggins AZ Jr Stroke Play and Phoenix Metro Jr. Championship, along with three runner-ups in 10 events entered. Frick joined the JGAA in 2016 at age 12, with nearly 80 tournaments entered since then.