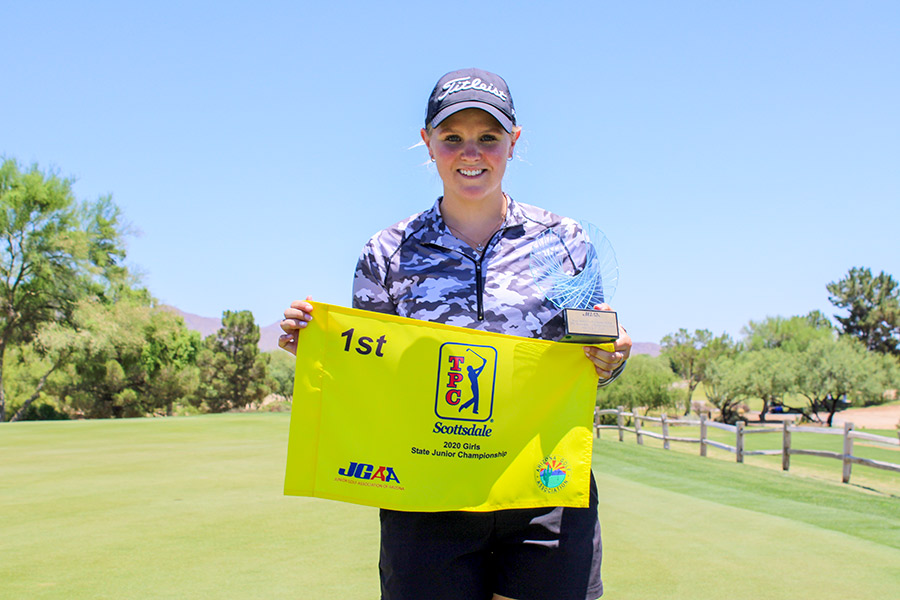 Kendall Todd, 17, of Goodyear posted scores of 2-under-par 69 and 1-over 72 to win the State Junior Golf Championship held at TPC Scottsdale’s Champions Course June 16-17. In the first round, she worked her way to 4-under par after 10 holes before cooling off a bit to finish with a one-stroke lead at 2-under par. In the second round, Todd recovered from a difficult stretch of holes on front nine to finish strong with four birdies and one bogey on the back nine.

“I reminded myself that I could still be in it to win, even though I might not be enough,” she said.

Todd adds the victory to another big win last year at The Thompson Invitational. The verbal commit to UNLV is looking forward to continuing her journey in the game that began years age as a youngster when she “used to ride in the golf cart” with her dad.

“I really like the coaches, they’re super sweet and nice. It just seemed like a good fit,” she said.

Todd’s final score of 1-under-par 141 edged out two players – Maya Benita of Tucson and Ashley Menne of Surprise – tied for second place at 1-over-par 143. Benita, bound for UA in the fall, fired a first round 74 followed by a 69, which included three birdies down the stretch on holes 10, 13 and 17.

Defending champion, Ashley Menne – vying for an unprecedented fifth-consecutive State Junior Championship – fired steady rounds of 71-72. Set to play for ASU in the fall, Menne put up a solid 28 pars, two birdies, a bogey and double bogey over 36 holes. 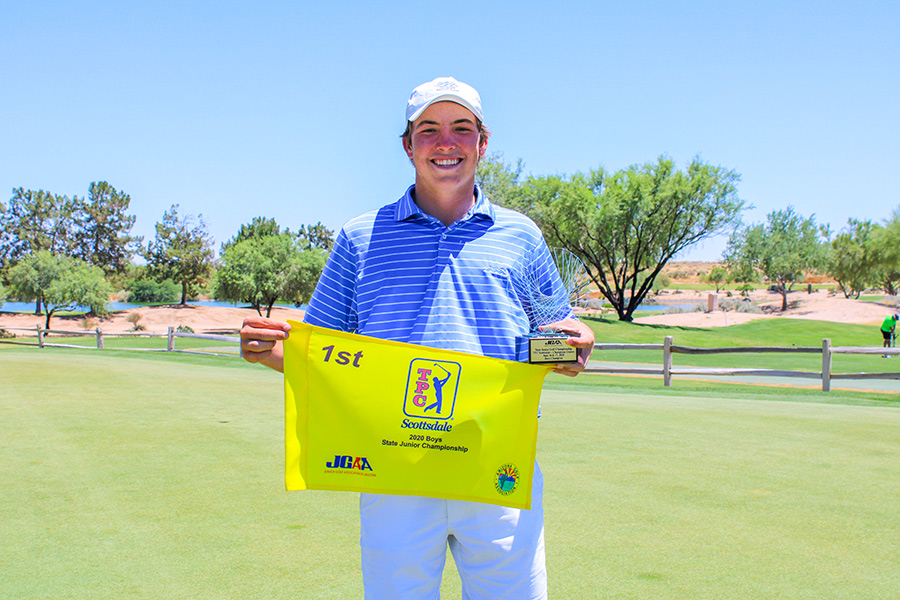 On the boy’s side, Joseph Lloyd of Scottsdale – a verbal commit to the University of Utah – broke through with a win after a near miss last week.

“I found something with my putting that really clicked; it really propelled me for the last two weeks,” he said.

A two-player race between Lloyd and Max Lyons of Peoria tightened up on a back nine that had been giving up a bunch of birdies during the tournament.

“I didn’t start out my best today,” said Lloyd after the final round. “But I knew making the turn that I was only one back.”

After birdies on 10 and 11, Lloyd’s clutch up-and-down for par on the 12th kept his momentum going in the right direction. Lyons answered with a birdie at 13 to go up by one stroke. They both birdied 14; and on No. 15, a drivable par-4, Lloyd “flared one to the right,” and pitched his second to about 10 feet. Meanwhile, Lyons made his birdie putt, shifting the pressure Lloyd, who sank the putt to stay one stroke behind Lyons with three holes remaining.

On the par-3 16th, Lloyd made another clutch up and down to level the match.

“I hit hybrid off the tee and Max ended up hitting it in the water, so I knew I had a good chance of winning with a par. I hit a 6-iron to the right edge of the green and just rolled the 20 footer to about six inches.”

While the dual for first place was going on, Johnny Walker of Chandler was making a move of his own. In the first round, he bounced back from a rocky start with a spectacular run on the back nine (31). He went five-under par for four holes (14-17) – including an ace at No. 16 from 189 yards with a 5-iron – to put up a 3-under-par 68. He posted another 68 in the final round thanks to four birdies on the back nine to finish at 6-under-par 136, two strokes off the pace set by Lloyd.