JGAA Alums Compete at Home in the NCAA Golf Championships 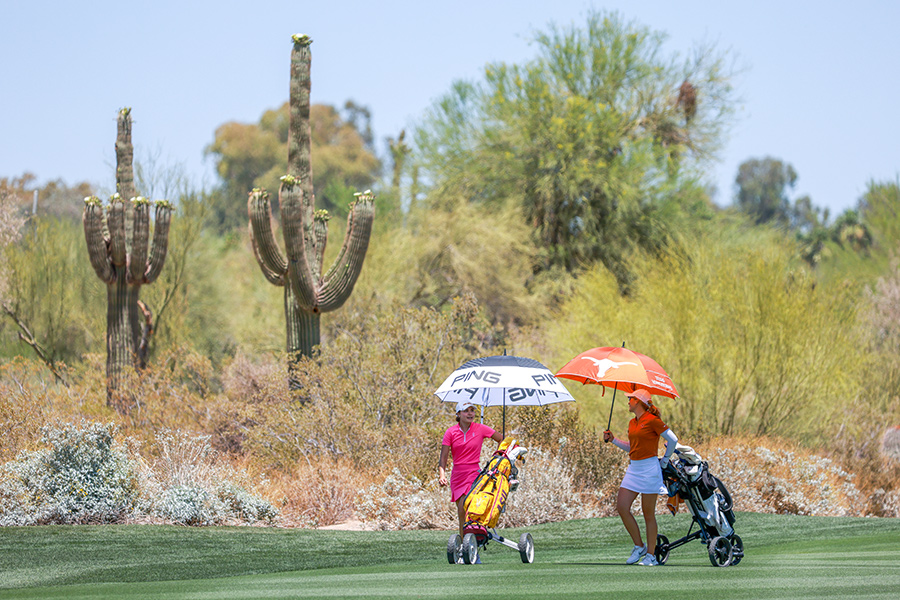 Menne helped her team reach match play competition, with a bogey-free, 7-under 65 in the third round.

“From the start of the day I was hitting irons really well, so that allowed me to make most of the greens,” she said. “My putting was really on today. I made a lot of birdie putts both inside 10 feet and outside of 20 feet. Everything was going in.”

Fortunes changed for ASU in match play, as Duke edged them out in the quarterfinals, but Menne continued to shine, winning her match 2&1. The Sun Devils took fifth place in the team competition.

“I am so proud of Ashley, she had such a great freshman campaign,” Farr-Kaye reflected. “Ashley is one of the top freshmen in the country. She came along fabulously this spring. She has grown and learned so much as a golfer and human being in the past year and it has been really fun to watch.”

Menne’s Xavier College Prep teammate, Emily Mahar joined Haylin Harris, past Salpointe High student, in the women’s championship. Mahar led the Virginia Tech Hokies, with a T59 performance (74-73-77—224), carding four birdies on her final 10 holes to notch the sophomore’s 12th round of par or better this season. Playing in her second NCAA Championships, Michigan State junior Haylin Harris finished tied for 88th at 12-over-par 228 (75-75-78). The Hokies’ and Spartan’s season came to an end after the third round.

In Tuesday morning’s team match play quarterfinals, Andersen opened an early four-hole lead before winning his match 4&3 en route to an ASU win over North Carolina. Meanwhile, Feagles and the Illini fell to Lorenz and the Sooners, who then turned around in the afternoon to prevail over Andersen and ASU in the semifinals. In the championship match, Pepperdine edged out Oklahoma in a tight match.

“Today was really a passing of the torch from our old guys to the younger ones,” said Oklahoma head coach Ryan Hybl. “Logan McAllister is the new leader of our team, and Ben Lorenz came out and showed the nation that he can play with the best of them.”

Speaking of McAllister, amazingly, he accomplished a feat not likely to ever be duplicated. He made two holes in one in competition at the 2021 NCAA Division I Men’s Golf Championship. First, he aced No. 5 in the fourth round of stroke play. Then he did it again two days later at No. 8 in the championship match.