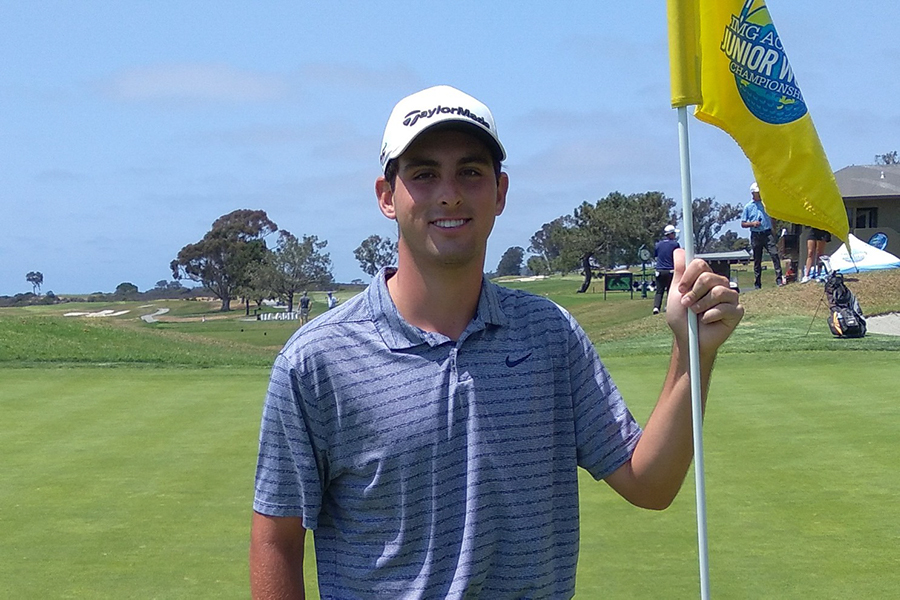 JGAA member Gavin Aurilia won the 2021 IMG Junior World Championship, held July 13-16 at Torrey Pines South Course. Thanks to a 5-under 66 in the third round, Aurilia took the Boys 15-18 division lead into the final round.

“The question was whether if I should keep playing aggressively or conservatively and just get my pars,” said Aurilia. “I’ve been in that situation before where I’ve played conservatively with the lead and it didn’t work out too well. Defensive golf can lead to bogeys.

“I just stuck to my game plan today. The last four holes were really tough with the winds so at that point I was just trying to get to the clubhouse with pars.”

In the final round Aurilia made double bogey-bogey on 12 and 14, then bounced back with a birdie on 15 on the way to victory at -3, a roomy four-shot margin over runner-up Matthew Broder of San Diego.

The win marked Aurilia’s ninth tournament appearance, and three years ago he even held the final round lead in the 13-14 competition before it slipped away. This time, however, he held on to become the first American player to win the Boys 15-18 division since 2012.

“This was redemption for that in my mind,’’ said Aurilia, who is bound for USC in the fall. “I used that as a learning experience, and it’s helped me ever since.”