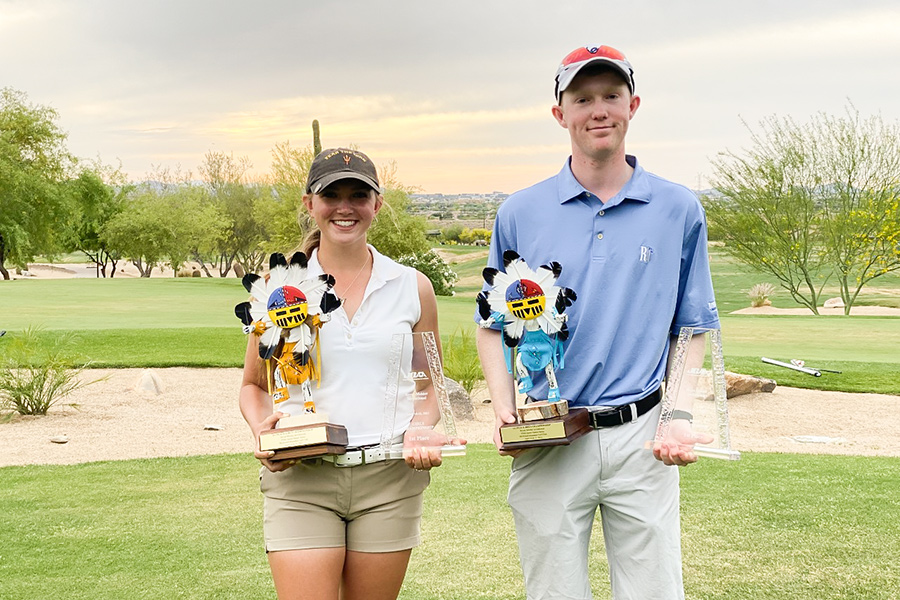 McDowell Mountain Golf Club hosted the fourth PING Junior Masters Series tournament of the 2021 JGAA season – Bryce Molder Invitational – April 10-11, with Cameron Keith from Alamo, California earning the win after only his second JGAA start. He posted a pair of 68s, 8-under par for the tournament, to win by two strokes. Three players finished tied for second place at 6-under-par 138:  Daniel Henely 68-70 of Tucson; Adam Miller (68-70) of Phoenix; and Mahanth Chirravuri (66-72) of Chandler.

Chirravuri set the first-round pace with a 6-under 66 that included eight birdies. Two behind Chirravuri entering the final round, Keith put up another 68 for his first JGAA win after a T11 finish in February at the Fisher-Bryan Invitational. Starting on the 10th hole each day, Keith saved his best for last, with a bogey-free, 4-under-par 32 on his final nine holes to close out the tournament.

In the Girls Championship division, Calynne Rosholt of Cave Creek also shot two rounds in the 60s to win by a six-stroke margin. Her third PING Jr Masters Series victory, fifth JGAA win overall, in the first round Rosholt shot 4-under-par 69 – including four birdies over six holes (13-18) – to take a two-stroke lead. In the second round the ASU commit, again, blitzed holes 13-18, with another 68, to pull away from the field in wire-to-wire style at 7-under par. Two players – Anya Mathur (72-71) of Scottsdale and Mattison Frick (71-72) of Peoria – finished tied for second place at 1-under-par 143. Mathur cruised along with three birdies, two bogeys and 31 pars while Frick made up ground on the final nine holes, with birdies at 13 and 18 along with an eagle at the par-5 15th hole.

The JGAA’s PING Junior Masters Series is made up of five 36-hole, invitation-only, events where 84 top-ranked Arizona junior golfers compete locally against their peers. Due to the strength of the field, players earn more national-level points. This helps Arizona’s best enter national junior golf tournaments as well as better prepares them for college golf and securing college golf scholarships.

“Our goal is to provide a competitive place for up-and-coming players to test their abilities,” said Alex Clark, Chairman of the Board of the JGAA.  “This tournament series will allow junior athletes to earn national-level points and will serve as a launching pad into nationally chartered events. We enjoy seeing athletes improve over the season and rise in standings throughout the years with this event. ”