Rylan Johnson wins in the Boys Championship division and Jennifer Seo wins on the girl’s side. 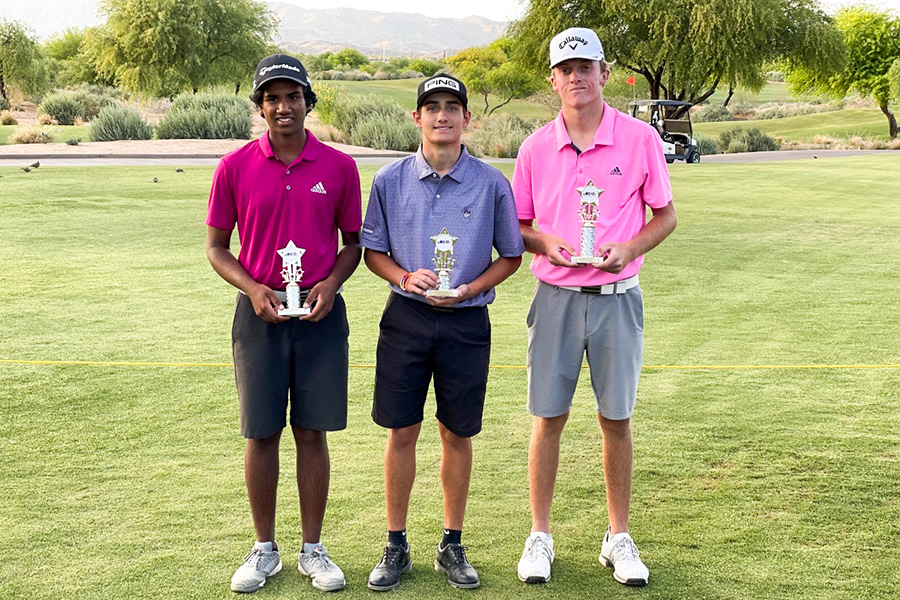 The first qualifier for the coveted 2021 IMG Academy Junior World Championship to be held July 12-16 in San Diego took place locally April 17-18, with 27 Arizona juniors earning spots into the field. A second qualifying tournament at the Mesa City Jr is scheduled for late June.

In the Boys Championship division at Whirlwind Golf Club’s Cattail Course, Rylan Johnson of Gilbert captured the first-round lead and never looked back, firing 7-under 65 followed by 4-under 68 to win by four strokes over two players tied for second place at 7-under par – Mahanth Chirravuri (68-69) of Chandler and Adam Miller (69-68) of Phoenix. Johnson, Chirravuri and Miller earned for first three spots, and Max Lyons (72-70) of Peoria and Johnny Walker (70-72) of Chandler also made the cut after T5 finishes at 2-under par.

In the first round of the Girls Championship division, Jennifer Seo of Chandler shot even par at Ocotillo Golf Club to sit three strokes off the first-round pace, 69, set by Gracie McGovern of Scottsdale. In the second round, Seo put up a 1-under 71 to take the championship by two strokes over second place finisher, McGovern, (69-75) and three strokes ahead of third place, held by Calynne Rosholt (71-74) of Cave Creek. Sammie Olson of Phoenix shot 73-74 to earn fourth place and the fourth qualifying spot.

Although they did not qualify, Nicholas Lippe of Chandler finished strong with a final round 3-under 69 for the win in the Boys 15-18 division while Kaya Kshatriya of Scottsdale came in first in the Girls 15-18 division at 8-over par.

In the Boys 11-12 division qualifier held at Leisure World’s Coyote Run Course, Zachary Schaefer of Tucson took first place with a 4-under-par 142 (68-74). Second place finisher, Arjun Somani shot 70-74 and Owen Setters finished T3 (69-77) to earn the last of three spots in the division. Apollo Lynch of Scottsdale captured the 10 and Under division (77-75—152, +6). He and Ian Kennedy (80-77) of Maricopa will advance to the championship.

At Bear Creek Golf Club in the Girls 13-14 division, Katherine Taylor of Scottsdale edged out Kaitlyn Helm of Litchfield Park in a playoff after both shot 4-over-par 146. They will be joined in San Diego by third place finisher Alexis Vakasiuola (74-74) of San Tan Valley and Anya Mathur (73-76), T4, of Scottsdale.