Summerhays Sweep at The Thunderbird Invitational

Preston repeats after a playoff, sister Grace wins by five at Papago. 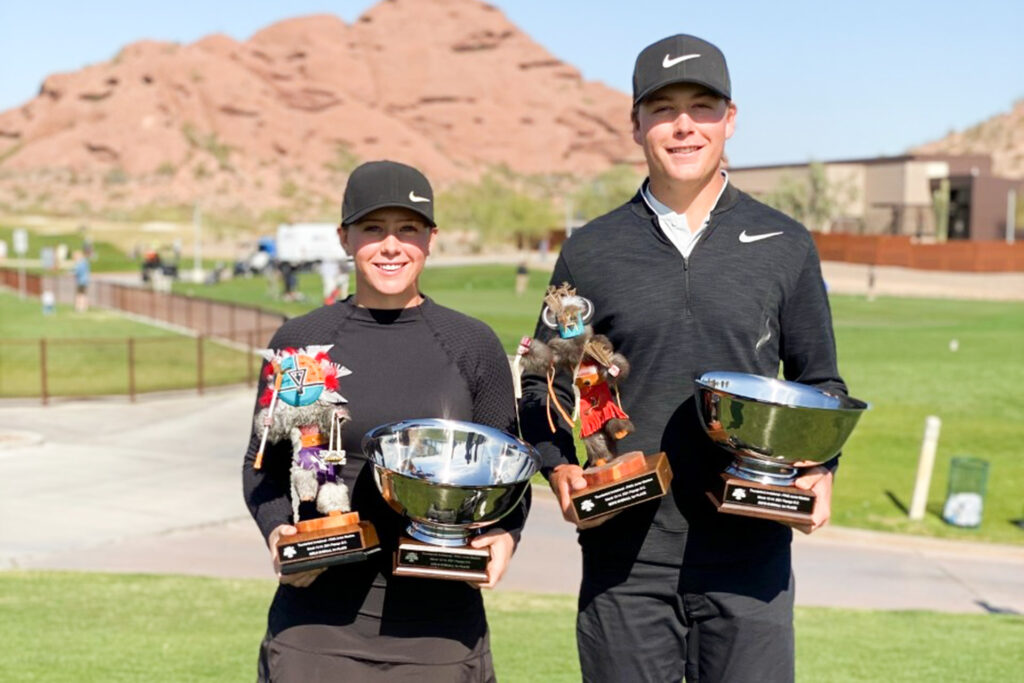 The Summerhays family celebrated two wins at the 2021 Thunderbird Invitational, held March 13-14 at Papago Golf Club. Preston, 18, defended his title after a four-hole playoff, and Grace, 16, cruised to victory by five strokes.

A Sun Devil commit, Preston set the pace in the Boys Championship division with a first-round 7-under 65. He started the day on No. 10 and went four under par over three holes – 18, 1 and 2 – before picking up two more birdies. Anawin Pikulthong and Alex Lynch sat four strokes back tied for second place at 69. In the second round, Hunter Thomson of Calgary, Alberta led the pack at 8-under 64. He reeled off four-straight birdies on holes 10-13 to erase his five-stroke deficit (first round 70) with five holes remaining. Summerhays, who shot a final-round 69, answered with a birdie on No. 17 to regain the lead until Thomson leveled the championship with a birdie on the final hole to force a playoff at 10-under-par 134.

Summerhays and Thomson played the 445-yard, par-4 18th three times, pushing birdie, birdie, par, before Summerhays prevailed with a par on the 225-yard, par-3 17th hole. Pikulthong finished strong with a final-round 66 to earn solo-third place at 9-under par, and Alan Quezada shot 6-under par (70-68—138) for fourth place.

In the Girls Championship division, Gracie McGovern shot an opening-round 2-under 70 to lead by one stroke over Grace Summerhays. In the second round, it was Summerhays’ turn to shoot 70, making five birdies in a seven-hole stretch (1-7), to cement the championship by five strokes at 3-under-par 141. The win marks Summerhays’ second PING Jr Masters Series victory of the season, after a first-place finish at the Fisher-Bryan Invitational in February and second place finish at the Warren Schutte Invitational in January. Jennifer Seo (74-72) and Logan Allen (72-74) finished tied for second place at 2-over par 146.

The Thunderbirds were founded in 1937 with the mission of promoting the Valley of the Sun through sports. The Thunderbirds consist of 55 “active” members and more than 250 “life” members.  In 2018 The Thunderbirds raised a record $14 million for charity from proceeds from last year’s tournament and have eclipsed $161 million in charitable giving since its inception in 1932.  For more information on The Thunderbirds or the Waste Management Phoenix Open, visit www.wmphoenixopen.com.