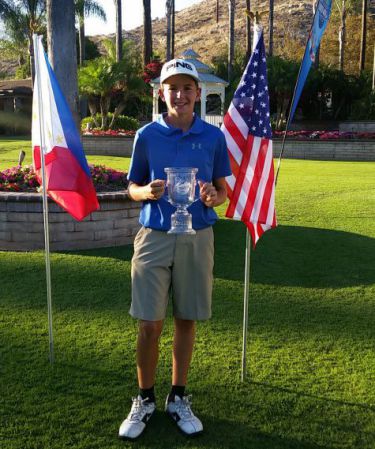 Clark made four birdies and a bogey to fire a 3-under-par 68 in the second round of the three-round event held at Morgan Run Resort and Club. He added bookend, even-par 71s to finish T7 for the tournament (71, 68, 71—210), eight strokes off the pace. Only six of the nearly 160 players in the Boys 13-14 Division placed higher.

Palmer started the tournament with a strong 4-under-par 68 made up of six birdies and two bogeys and a back-nine 33 at Sycuan Resort’s Oak Glen course. He followed with a 2-over-par 74 in the second round before finishing the tournament with a final-round, even-par 72 (68-74-72—214). His 2-under-par tournament total put him at T6, two strokes off the pace in the Boys 11-12 Division.

Gracie McGovern, from Scottsdale, finished in 8th place in the Girls 9-10 Division with a 10-over-par 59, 58, 61—178 performance at Lomas Santa Fe Executive Course.

About the IMG Academy Junior World Championships
It was February, 1968 when John W Brown, A.S. “Lou” Smith and Norrie West decided the San Diego Junior Golf Association would host the Junior World Golf Championships. The three had discussed the idea of organizing a tournament where juniors from all parts of the world could come together to play golf and share in cultural exchange. In its inaugural year, 475 juniors participated in the event representing seven countries and 20 states. Today, the tournament has grown to 1,200 participants representing 56 countries and 42 states. The IMG Academy Junior World Golf Championships is the largest international event in the world and is unique for its international representation and cultural diversity.