In the Girls Division, Xavier College Prep student, Alisa Snyder, also in the class of 2016, slammed the door on Tucson resident, Sydney Colwill, with a final-round 65 that included seven birdies and no bogies. With the 65, Snyder set a new competitive course record for ladies at Papago Golf Course. Her 74-65–139 for the event was good enough to secure a five-stroke victory. Snyder notches a first-place finish early in the 2015 season after a handful of near misses last year where she place 4th in the Tucson Spring Classic; qualified PGA Junior Championship and Finished tied-3rd individually in the 2014 AZ High School State Championship in November with a score of 68-75–143. 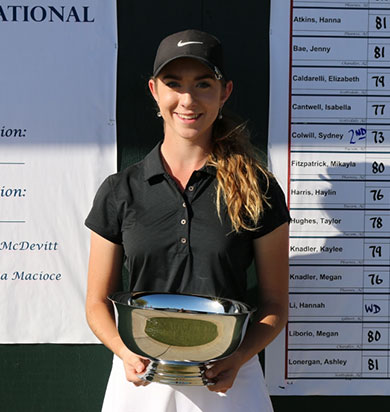 Alisa Snyder: Blistered the field with a final round 65 – a new ladies course record at Papago 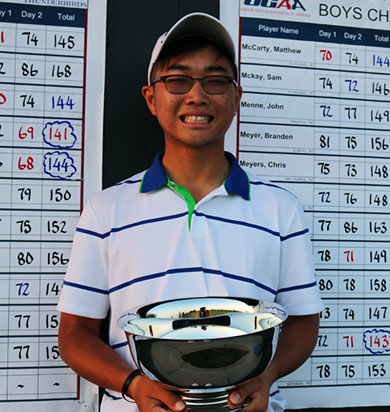 Eric Ghim: Edged out Jake Chanen with a birdie on the first playoff hole

Glendale resident, Eric Ghim, edged out Jake Chanen with a birdie on the first playoff hole to capture the Boys title at the 2015 Thunderbird Invitational, contested at Papago Golf Course March 7-8. Ghim carded eight birdies during the two-day event on his way to a 72-69–141 winning score. Set to graduate from Sandra Day O’Connor High School in 2016, Ghim adds his latest victory to a host of achievements. He won the 2014 Mesa City Junior and Tucson City Junior; was runner-up in the Phoenix City Junior; finished 3rd in the Arizona Junior State Championship; and tied for 3rd place individually in the AZ High School State Championship in November of 2014.

The 21st annual Thunderbird Invitational teed off at Papago Golf Course this Saturday and Sunday, March 7-8. The field featured 76 of Arizona’s finest junior golfers (boy and girls) ranging in age from 13-18. View final standings HERE. VIEW ALL OF THE TOURNAMENT PHOTOS.

“It’s amazing to think that this event has been showcasing Arizona’s long list of talented junior golfers for 21 years,” said Scott McNevin, Executive Director of the JGAA. “Congratulation to Alisa and Eric on their impressive wins, and as always, a huge thank you goes out to The Thunderbirds for their incredible dedication to this event and junior golf in general.”

Title sponsors of the event, The Thunderbirds were founded in 1937 with the mission of promoting the Valley of the Sun through sports. Consisting of 55 “active” members and more than 250 “life” members, The Thunderbirds host the Waste Management Phoenix Open; the best-attended golf tournament in the world, which to date has raised nearly $80 million for Valley charities, including the JGAA. With its unmatched fan participation and rich history dating back more than 78 years, The Waste Management Phoenix Open has gained legendary status for being a unique stop on the PGA TOUR. For more information on The Thunderbirds call 602.870.0163 or visit www.ThunderbirdsCharities.org.