The only team to finish under par, British Columbia shot a final-round team score of 2-over-par 218 to finish the championship at 3-under par overall as a team. Team Southern California finished in second place at even-par, and team Utah rounded out the top-3 at 2-over par overall.

Similar to a collegiate event, the Junior America’s Cup features 18 teams of four boys representing their state, province or country. The competition is held over 54-holes with each team counting its best three scores each round. 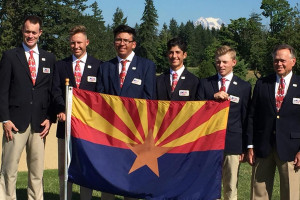 Team Arizona – made up of Phoenix residents Daniel Thompson and Davis Evans joined by Jonathan Walters of Tucson and Cameron Barzekoff of Mesa – finished in seventh place at 14-over-par 225. Barzekoff and Thompson both finished T20 at 6-over par for the tournament. Walters finished T31 (+9), and Evans finished T43 (+12).

“Congratulation to the guys. They played well under pressure against 17 other very talented teams,” said Scott McNevin, executive director of the JGAA. “Arizona finished in 12th place last year, so this is definitely a step in the right direction.”

For medalist honors, second-round leader Nolan Thoroughgood continued his great play in the final round by firing a 2-under par 70 on the 7,220-yard layout. His 3-day total of 8-under-par 208 gave him a four-shot victory.