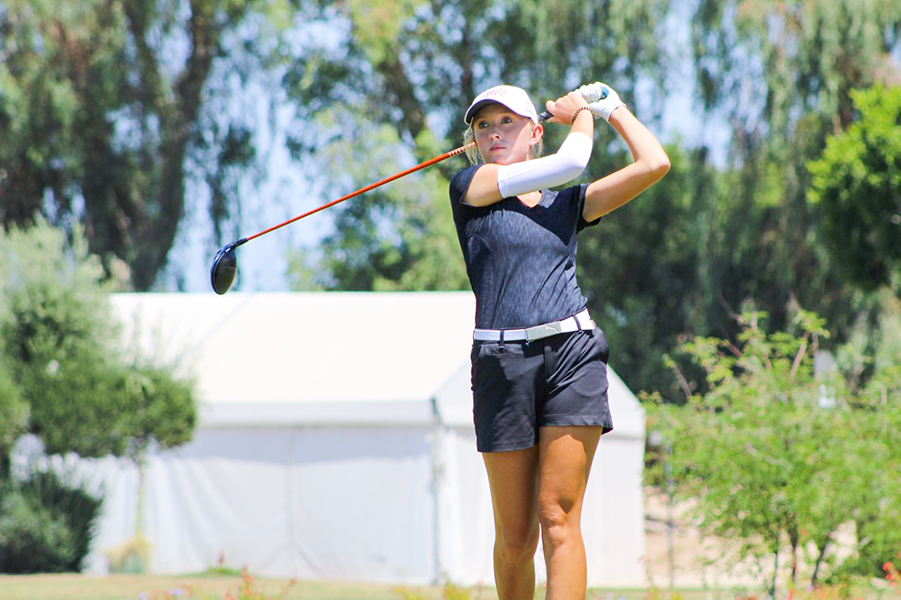 Mesa’s Sydney Bryan fired rounds of 67-66 to win the Girls Championships division at the Thunderbird Junior Classic, held at Arizona Biltmore GC June 10-11. Bryan set the pace in the first round, and improved by one in the second to shoot the lowest two rounds of the tournament. Along the way, she made 11 birdies and two bogeys to finish at 9-under-par 133, a healthy seven strokes ahead of the two second place finishers at 2-under-par 140 – Surprise’s Ashley Menne (70-70) and Cave Creek’s Katie Stinchcomb (69-71).

Max Lyons of Peoria (70-63), Brayden Bozak of Gilbert (69-64) and Joseph Lloyd of Scottsdale (67-66) tied for first place to earn co-champions* honors in the Boys Championship division at 9-under-par 133. Lyons started with a 70, six strokes behind first round leader Davis Johnson (64), before shooting a tournament-low 63 in the second round. In all, Lyons made 10 birdies and only one bogey, which came on the first hole of the tournament. For his part, Bozak pulled into the three-way tie thanks to a 7-under 64 that included an incredible streak of seven birdies over eight holes. And Lloyd carded 12 birdies and three bogeys, including birdies in both rounds on holes 3 and 9.

division, Kaitlyn Moreland won the girls side at 7-over-par 61 (33-28), and on the boy’s side, Maverick Midthun shot rounds of 28-31 to finish in first place at 5-over-par 59. View complete final standings for Thunderbird Junior Classic.

Health and Safety: *Playoffs temporarily suspended due to Covid-19 protocols. The third tournament after resuming the 2020 JGAA schedule, health and safety guidelines have been put in place that players, tournament staff, families and spectators are required to follow, including (but not limited to) practicing social distancing and maintaining a six-foot distance from other people (except household members) while on golf course property (this includes the driving range, practice putting green, teeing area, etc.). Click here for complete JGAA 2020 COVID-19 Tournament Guidelines.

The Thunderbirds were founded in 1937 with the mission of promoting the Valley of the Sun through sports. The Thunderbirds consist of 55 “active” members and more than 250 “life” members. In 2018 The Thunderbirds raised a record $14 million for charity from proceeds from last year’s tournament and have eclipsed $161 million in charitable giving since its inception in 1932. For more information on The Thunderbirds or the Waste Management Phoenix Open, visit www.wmphoenixopen.com.