Third PING Junior Masters Series tournament of the season tees off for the 26th time. 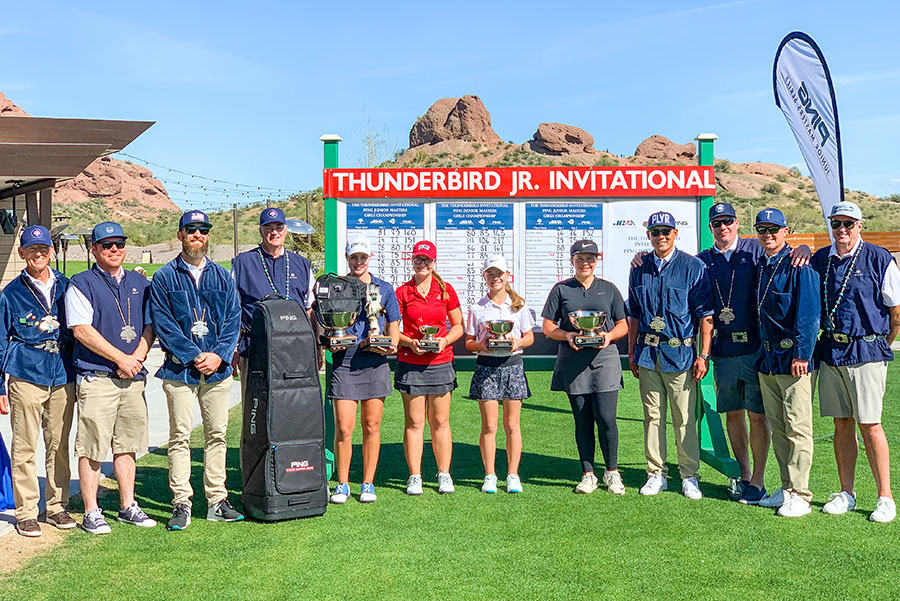 The Junior Golf Association of Arizona (JGAA) is hosting the Thunderbird Invitational at Papago Golf Course February 29-March 1. The field features 84 of Arizona’s best junior golfers (48 boys and 36 girls) ranging in age from 13-18 competing in the third PING Junior Masters Series tournament on the 2020 JGAA schedule. Saturday tee times begin at 11:30 a.m. and 7:45 a.m. on Sunday with an awards ceremony following play.

“Everybody knows The Thunderbirds from the Waste Management Phoenix Open, but most don’t realize how much they do for amateur golf,” said Scott McNevin, Executive Director of the JGAA. “They not only support this event financially, they show up in their tunics ready to help out at the tournament each day.”

On the boy’s side, five of last year’s top-6 finalists are returning. Defending champion, Chaz Aurilia, moved on to college golf at the University of Arizona. Moreover, all of the top-10 boys in the JGAA Player of the Year points race for 2020 are set to play including No. 1, Brady Haake of Gilbert, who won the second PING Junior Masters Series tournament of the year just weeks ago. No. 2, Preston Summerhays of Scottsdale (T3 finish last year) also is set to play; he won the first PING Junior Masters Series tournament of the 2020 season – the Warren Schutte Invitational. The 2019 JGAA Player of the Year, Ben Lorenz, will give it another go after a T3 finish at the Thunderbird Invitational last year.

After a T5 finish in 2019, Anawin Pikulthong of Gilbert enters the field fresh off a 2020 win in early February at the Phoenix Metro Junior Championship. And Phoenix resident Tucker Clark looks to improve on his T7 finish last year. Notably, he earned the honorable mention award for the American Junior Golf Association’s 2019 Rolex Junior All-American Team.

In the Girls Championship division, Breyana Matthews of Scottsdale returns to defend her title against a talented field led by No. 1-ranked player, Mattison Frick of Peoria, fresh off a second-place finish at a recent PING Jr Masters Series tournament and two wins so far this season. No 2 in the rankings, Tucson’s Maya Benita recently won the Fisher-Bryan Golf Academy Invitational. Sydney Bryan of Mesa sits in third place overall, and is poised for a win after third- and fourth-place finishes in the first two PING Junior Masters Series tournaments. And Grace Summerhays, who finished in second place last year, will tee it up for the second time this season after a second-place finish at the Warren Schutte Invitational to go along with three wins last season including a PING Jr Masters Series event.

The Thunderbirds were founded in 1937 with the mission of promoting the Valley of the Sun through sports. The Thunderbirds consist of 55 “active” members and more than 250 “life” members. In 2020 The Thunderbirds raised a record $14 million for charity from proceeds from this year’s tournament and have eclipsed $161 million in charitable giving since its inception in 1932. For more information on The Thunderbirds or the Waste Management Phoenix Open, visit www.wmphoenixopen.com.