By Golf EditorNovember 19, 2020No Comments

The JGAA announced special award winners for the 2020 seasons, including Player of the Year and Sportsmanship awards across five age divisions, with additional recognition going to those who made holes in one, Most Improved players and the Volunteer of the Year.

“Every year the membership and level of play continues to rise,” said Scott McNevin, Executive Director of the JGAA. “More kids, lower scores, and best of all, there were a bunch of kids to consider for the sportsmanship award. It’s very gratifying to see this vital aspect of the game grow along with these young players.” 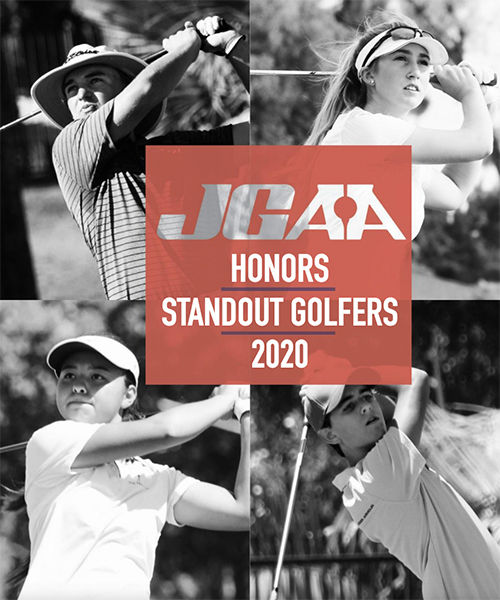 Bound for Marquette University in the fall, Max Lyons of Scottsdale won the Player of the Year award in the Boys Championship division. He managed to notch four wins, including 11 top-10s in 13 starts, thanks in part to a handful of low rounds. Lyons fired a final-round, 8-under 63 to win the Thunderbird Junior Classic; a 7-under-par 64 in the final round of the Scottsdale Junior Championship; and a sizzling 11-under-par 61 to win the Chandler City Junior Championship. Lyons also placed fifth in the highly competitive AJGA PING Heather Farr Classic. He finished the season with a 69.79 scoring average over 24 rounds.

In the Girls Championship division, Calynne Rosholt of Cave Creek – who recently signed to play college golf for ASU – placed sixth or better in all nine events she entered. Two of her four wins came in coveted PING Jr Masters Series tournaments. In the first, Thunderbird Invitational, Rosholt was the only player in red numbers, closing out the tournament with four-consecutive birdies. In the second, Willie Low Invitational presented by MJ Insurance, Rosholt made a birdie on the final hole to enter a three-way tie for first place (no playoff due to health and safety precautions). She earn another co-victory at the Desert Mashie Championship as well as an outright win at the Chandler City Junior Golf Championship. She finished the season with a 71.19 scoring average over 16 rounds.

PLAYER OF THE YEAR

4 wins, placed 6th or better in all 9 events entered

· Albatross at the IHOP Classic

Mark Ohlendorf: Volunteered in 12 tournaments over a total of 24 days