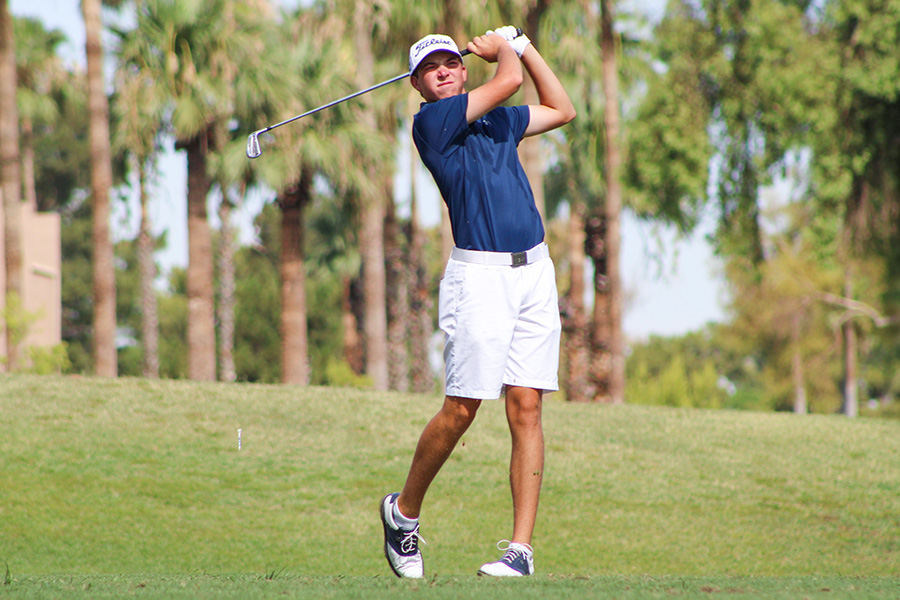 Joseph Lloyd shot 63, the low round of the tournament, in the final round at Dobson Ranch Golf Course to win the Mesa City JR Championship by one stroke. Held June 25-26, the victory marked Lloyd’s third-straight first-place finish in the Boys Championship division since the Thunderbird Junior Classic, June 11, followed by another win at the State Junior Golf Championship on June 17.

The scores started out low and continued to drop. Three players, all from Scottsdale, fired first-round 6-under-par 66s – Lloyd, Cade Anderson and Cameron Kaiser – for a share of the lead going into the final round. Kaiser followed with a 5-under 67, Anderson with an 8-under 64 and Lloyd put up an incredible 9-under 63. The sensational round was fueled by seven birdies and an eagle on the par-5 first hole. In fact, Lloyd – a verbal commit to the University of Utah – dominated the par 5s both days, going 11-under for 10 holes on the golf course’s unusual configuration of five par 5s. Kaiser took third place at 11-under-par 133; Anderson finished in second place at 14-under-par 130; and Lloyd ended up at 15-under-par 129.

In the Girls Championship division, Carly Strole of Avondale fired 5-under-par 139 after rounds of 70-69 to win by two strokes over Mackenzie McRee (71-70—141, -3) of Tucson. Strole made up ground both days on the back nine, posting 2-under 33 in the first round and 3-under 32 in the second. For her part, McRee also put on a back-nine charge in the final round with three-consecutive birdies on holes 10-12 and one more on 18 to post 4-under 31. Lauren Garcia (72-71) of Gilbert and Aaryanna Morris (70-73) of Avondale finished tied for third place at 1-under-par 143.