“I have played this tournament the past two years and I have loved every moment of it,” said Lorenz. “Without the support of my friends and family encouraging me to be better, I would have not been able to get this far.” 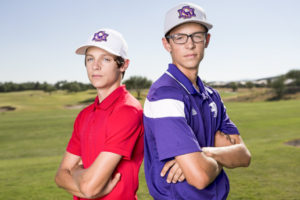 No doubt Blake’s twin 3-under-par 33s on the back nine in rounds 2 and 3 helped secure the win. Lorenz will move on to play golf for the University of Oklahoma in the fall. Blake’s younger brother, Ben, also played well in the tournament, earning a T8 finish at 3-under-par 213 for the event (72-70-71).

Tucker Clark finished T5 at 4-under-par 212 for the event (75-68-69) by finishing up strong with two rounds made up of nine birdies and two bogeys.

JGAA Player of the Year Standings

All five players compete regularly on the JGAA schedule, and moved up the points race for Player of the Year honors. Ben and Blake Lorenz sit at third and fourth place, respectively. Gavin Aurillia is in ninth place, while Chaz is in 44th. And Clark is in 12th place in the season-long competition with about a dozen tournaments left on the schedule.