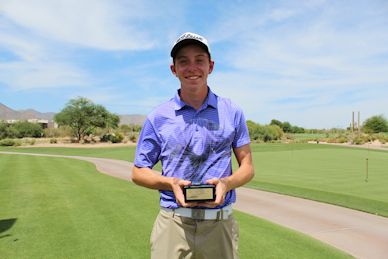 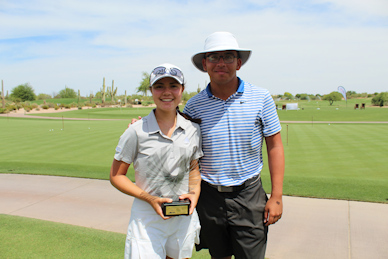 The top boys in the state were invited to play based on their point totals in the JGAA’s Boys Championship division Player of the Year race through the 2019 Phoenix City Junior Championship. Van Slyck, No. 8 seed, cruised through the first three rounds with wins of 5 & 4, 4 & 2 and 4 & 3 before taking the championship match 7 & 5 over No. 7 seed, Ethan Adams, of Chandler. No. 12 seed, Zach McDermid, of Mesa and No. 6 seed, Brayden Bozak, of Gilbert made it to the quarter finals. The win marks Van Slyck’s first of the season after 15 starts with four top-10 finishes.

The top 10 girls in the state based on their point totals in the Girls Championship Division Player of the Year selection process were invited to participate in the tournament.

Surprise resident Ashley Menne lived up to her No. 1 seed with wins of 7 & 5 and 5 & 4 before prevailing 5 & 4 over No. 3 seed, Mattison Frick, of Peoria. Sydney Seigel of Scottsdale and Madeline Adam of Chandler made the quarter finals. Menne sits in second place in the season-long race for JGAA Player of the Year Award with six wins and two runner-up finishes in 10 events entered this season.