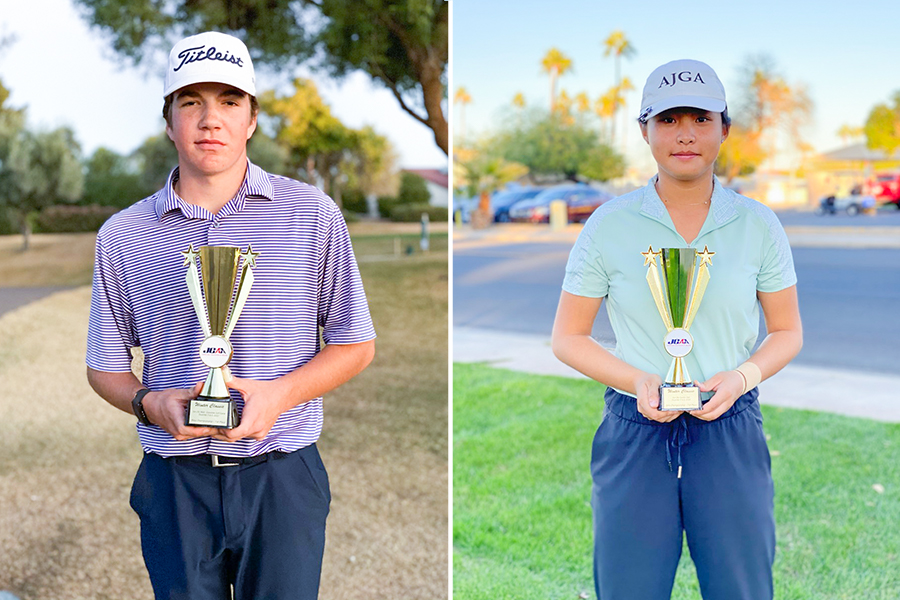 Emma Tang of Chino Hills, California shot two rounds of 2-over-par 74 at Sun City Country Club, 4-over-par 148 for the tournament, to win the Girls Championship division over Aaryanna Morris of Avondale, who posted 7-over-par 151 with rounds of 76-75. The victory marks Tang’s second-consecutive JGAA championship since her November 1st win at the Fall Classic. Jennifer Seo of Chandler came in a personal best third place at 8-over par, one stroke behind Morris after shooting 79-73—152.

In the Boys Championship division, contested at Sun City West Grandview Golf Course, Wheaton Ennis of Litchfield Park and Max Herendeen of Bellevue, Washington both started off with 5-under-par 67s for a share of the first-round lead. Ennis put together a fantastic five-hole stretch with four birdies and an eagle-2 while Herendeen recorded five birdies on his bogeyless scorecard.

In the second round, Ennis jumped out to an early lead on the first hole with an eagle, before clinching the tournament with three birdies on the final three holes en route to another 5-under 67, 10-under 134 for the championship. Herendeen gave chase with three birdies before finishing in a three-way tie for second place at 6-under-par 138 with Brett Sawaia (71-67) of Henderson, Nevada and Alex Lynch (70-68) of Scottsdale. Like Tang, Ennis also posted his second-consecutive JGAA victory. He won the Scottsdale Junior Championship in August in the Boys 15-18 division.