By Golf EditorJuly 2, 2019No Comments 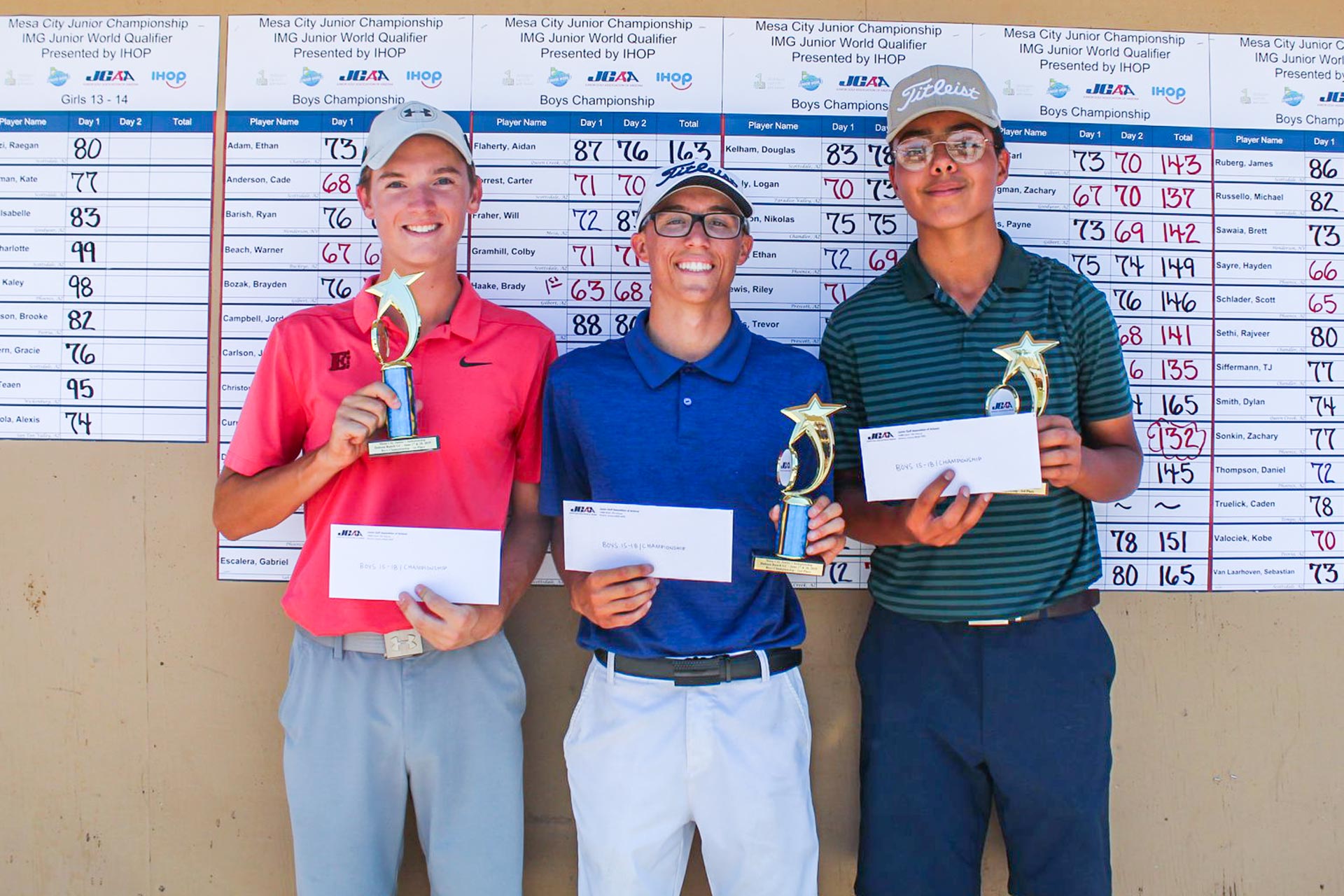 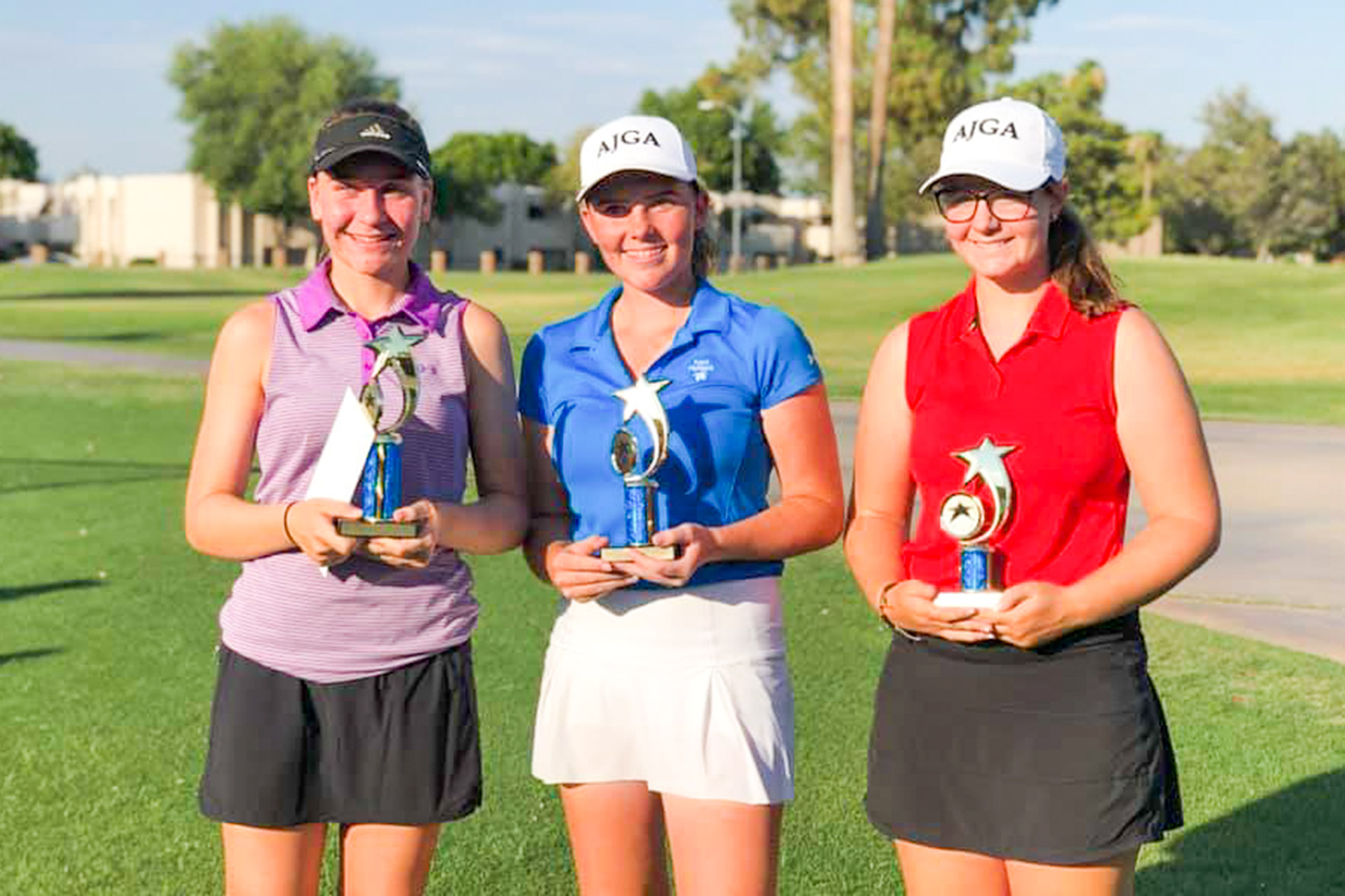 The Mesa City Jr / IMG Jr World Qualifier Presented by IHOP held at Dobson Ranch and Viewpoint Golf Resort ended with two players tied for first place in the Boys Championship division. Brady Haake of Gilbert and Damon Vilkauskas of Mesa fired matching rounds of 63-68-131 to finish regulation play at 13-under par. Haake went on to edge Vilkauskas in a playoff. Johnny Walker (69-63) of Chandler and Alan Quezada (64-68) of Phoenix finished tied for third place at 12-under-par 132. Haake, Vilkauskas and Quezada all qualified to play IMG Academy Jr World Championship.
In the Girls Championship division, Makenzie Cooper of Litchfield Park shot 68-72 to finish in first place at 4-under-par 140. Three players finished tied for third place with identical 3-under-par 141s (70-71) – Madeleine Laux of Goodyear; Sydney Seigel of Scottsdale; and Carly Strole of Avondale. Cooper and Laux advanced to play in the IMG Academy Jr World Championship.
Kai Heiner of Gilbert won the Boys 15-18 division at even par (69-75-144). Adam Miller of Phoenix won in the Boys 13-14 division by eight strokes at 12-under par (67-65-132). In addition to Miller, Carlos Astiazaran and Wyatt Chapman also qualified in the Boys 13-14 division. Trenton Stuart of Lake Havasu shot 3-under par (70-69-139) to win the Boys 11-12 division. He will join Oliver Uribe and Joey Hage at the IMG championship. And Maverick Midthun of Chandler, who already qualified in April, shot 72-74-146 to win the Boys 10 and Under division at 4-over par. Kieran Walsh and John Meza also qualified in the Boys 10 and Under division.
Iman Abraham of Phoenix won in the Girls 15-18 division, posting a 10-over-par 154 (72-82). Gracie McGovern (76-70-146, +2) of Scottsdale won the Girls 13-14 division to qualify alongside Kate Hauptman. Anya Mathur of Scottsdale won the Girls 11-12 Division at 8-over par (72-78-150). She will join Natalia Lamadrid at the IMG Academy Jr World. Alexis Lamadrid of Phoenix won in the Girls 10 and Under division at 10-over-par 152 (78-74). Aubrey Hilgers and Kaitlyn Moreland qualified for IMG Academy Jr World Championship.
The Mesa City Jr. / IMG Jr World Qualifier was the second of two local qualifying tournaments. The first was held in April.
The players who qualified for the IMG Academy Jr World Championship in the April event are:
Boys 15-18
Girls 15-18
Boys 13-14
Girls 13-14
Boys 11-12
Girls 11-12
Boys 10 and Under
Girls 10 and Under
The 2019 IMG Academy Junior World Championships kicks off July 8-12. From its humble beginnings in 1952 with a group of 50 young players at the then Mission Valley Country Club, today the IMG Academy Junior World Golf Championships has grown to host 1,200 participants representing 56 countries and 42 states. The tournament is the largest international event in the world and is uniquely recognized for its cultural diversity. Hosted at famed Torrey Pines as well as other San-Diego-area clubs, in 1968 John W Brown, A.S. “Lou” Smith and Norrie West decided the San Diego Junior Golf Association would host the Junior World Golf Championships to create a tournament where juniors from all parts of the world could come together to play golf and grow culturally. Click here to learn more about the IMG Academy Junior World Championships.