Third PING Junior Masters Series tournament of the season tees off for the 25th time. 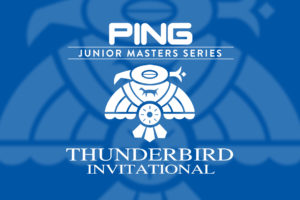 The Junior Golf Association of Arizona (JGAA) is hosting the 25th annual Thunderbird Invitational, which tees off at Papago Golf Course March 2-3. The field features 84 of Arizona’s best junior golfers (48 boys and 36 girls) ranging in age from 13-18 competing in the third PING Junior Masters Series tournament on the 2019 JGAA schedule of events. Tee times for Saturday will begin at 11:30 a.m. and 7:30 a.m. on Sunday with an awards ceremony following play.

“Everybody associates The Thunderbirds with the Waste Management Phoenix Open, but most don’t know what they do for junior golf,” said Scott McNevin, Executive Director of the JGAA. “They support this event financially – show up in their tunics ready to help out at the tournament each day. The event also became part of the PING Junior Masters Series back in 2016. It’s clearly one of the best tournaments on the JGAA schedule and a favorite for many of the players.”

Nine of the current top-10 boys in the JGAA Player of the Year points race are in the field including No. 1, Mahanth Chirravuri of Chandler, who is fresh off a second-place finish at the Raven Invitational two weeks ago. Gunnar Broin, No 2 overall of Chaska, Minnesota, is also in the field; he edged out Chirravuri in the Raven Invitational for the win. Preston Summerhays, T3 overall, came in T3 last year at the Thunderbird Invitational. He started out hot in 2019 with a win at the New Year Classic. And Tucker Clark of Paradise Valley also sits T3 for the season so far. He enters the third PING Junior Masters event with two solid T3 finishes in the first two.

In the Girls Championship division, last year’s champion, Kelly Su, moved on to college golf at Northwestern, and Ashely Menne, runner up, is not in the field. This leaves the door open for frontrunner and current No. 1-ranked player, Madeleine Laux of Goodyear, who has finished T4, 5th, 1st and 1st in the four events she has entered so far this season. Second-ranked, Grace Summerhays of Scottsdale, enters the field with 1st, 4th and 2nd place finishes under her belt. Sydney Bryan of Scottsdale notched T1 and T3 finishes to sit in third place overall in the season-long points race. And fourth-ranked Abby Schutte of Goodyear notched 4th and 3rd place finishes in the two events she’s entered in 2019.

The JGAA’s Junior Masters Series is made up of five 36-hole, invitation-only, events where top-ranked Arizona junior golfers compete locally against their peers. Due to the strength of the field, players earn more national-level points. This helps Arizona’s best enter national junior golf tournaments as well as better prepares them for college golf and securing college golf scholarships. The field is made up of the JGAA’s Boys and Girls Championship Divisions (full field) who were invited to compete by virtue of their national ranking on Junior Golf Scoreboard – boys must be in the top 3,500 and girls in the top 1,500.

The Thunderbirds were founded in 1937 with the mission of promoting the Valley of the Sun through sports. The Thunderbirds consist of 55 “active” members and more than 250 “life” members. In 2018 The Thunderbirds raised a record $12.2 million for charity from proceeds from last year’s tournament and have eclipsed $134 million in charitable giving since its inception in 1932. For more information on The Thunderbirds or the Waste Management Phoenix Open, visit www.wmphoenixopen.com.