Fisher-Bryan Invitational Tees Off This Weekend at Longbow 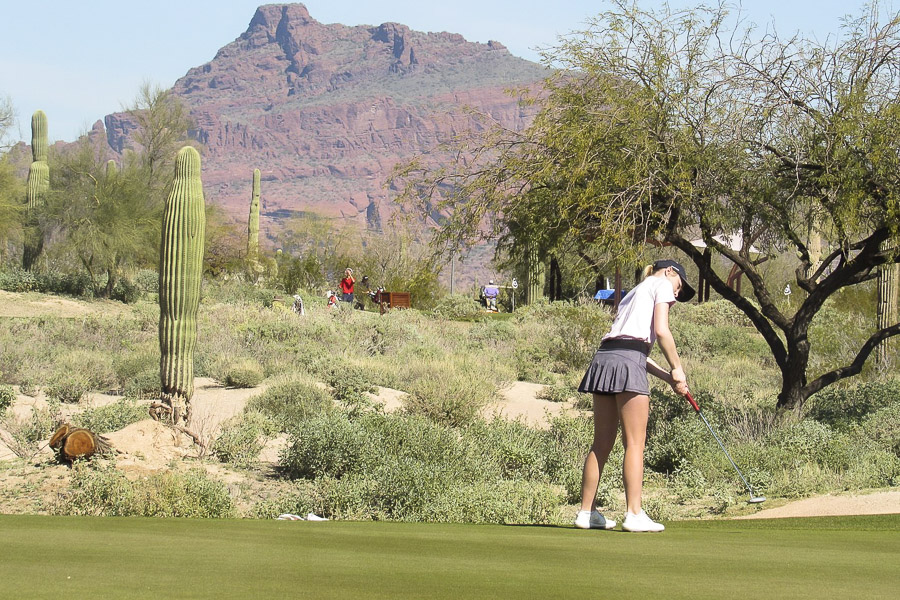 Arizona’s best junior golfers – 30 girls and 48 boys – will gather at Longbow Golf Club February 13-14 to compete in the 2021 Fisher-Bryan Invitational, the second prestigious PING Junior Masters Series of the JGAA season. Reserved for boys in the top 3,500 on Junior Golf Scoreboard and girls in the top 1,500, the field is tailored to Arizona junior golfers with the desire and ability to compete locally against their top-ranked peers.

“Our goal is to provide a competitive place for aspiring players to play,” said Alex Clark, Chairman of the Board of the JGAA. “This tournament series allows kids to earn national-level points and serves as a launching pad for nationally chartered events.”

Players to watch in the Boys Championship division include Adam Miller, who finished T18 last year. He’s off to a great start in 2021, with a win at the first PING Jr Masters Series tournament of the season, Warren Schutte Invitational. Longbow holds fond memories for Miller after his win there in September at the AJGA’s 2020 PING Heather Farr Classic, where he fired 8-under, 68-66 to win by three.

“This was only my second AJGA event,” said Miller. “I was just really surprised in myself that I could win.”

A JGAA member since 2008 with more than 160 starts, Noah Nuez hopes to capture his first PING Jr Masters Series tournament in the wake of a solid T3 performance at the Warrant Schutte Invitational. Last year he posted a runner-up and two T5 finishes, and in 2019, won twice: Phoenix Metro Jr and Antigua Milt Coggins AZ Jr Stroke Play.

Cameron Kaiser enters the field after finishing T13 at last year’s Fisher-Bryan Invitational and recently T18 in January at the Warren Schutte Invitational. Bound for Santa Clara University, Kaiser is looking for his second PING Jr Masters Series tournament since his first at the 2020 Willie Low Invitational, the same year he also posted one second place and two third place finishes along with six top-10s and 10 top-25s in 10 events entered.

Joseph Lloyd finished T18 at Longbow during the 2020 Fisher-Bryan Invitational, and followed with a T32 during the PING Heather Farr Classic. So far in 2021, the University of Utah commit won the New Year Classic and notched a T10 at the Warren Schutte Invitational. Last June Lloyd went on a tear with three consecutive wins in addition to three third-place finishes, seven top-10s and 11 top-25s in 12 tournaments entered that season.

On the girl’s side, Mattison Frick plays well at Longbow. She finished tied for the lead in the 2020 Fisher-Bryan Invitational before being edged out in a playoff, and followed up with a T18 finish at Longbow during the PING Heather Farr Classic. She already recorded third-place and T6 finishes in 2021 along with last year’s tally of three wins, three runner-ups, one third place finish, nine top-10s and 10 top-25s in all 10 events entered in 2020.

Although Grace Summerhays did not compete in the 2020 Fisher-Bryan Invitational at Longbow, she did finish T12 at Longbow in 2020 at the PING Heather Farr Classic. She now enters the field after recently finishing in second place for the second-consecutive year at the Warren Schutte Invitational. And in 2019 JGAA play, she entered six events, winning half of them and placing second in two others.

Kendall Todd who edged out Summerhays for the win at the Warren Schutte Invitational, enters the field after an 11th place finish in her most recent look at Longbow during the 2020 PING Heather Farr Classic. In 2020 JGAA play, the UNLV commit played in four events, won two, and finished in the top-10 in all four.

Sydney Bryan, also bound for UNLV, turned in a solo-fourth-place finish in the 2020 Fisher-Bryan Invitational as well as a 10th-place finish at Longbow in the PING Heather Farr Classic later that year. She finished strong in 2020 JGAA competition, with top-25s in all but one of her six starts. She won once, came in second place once and third place once.