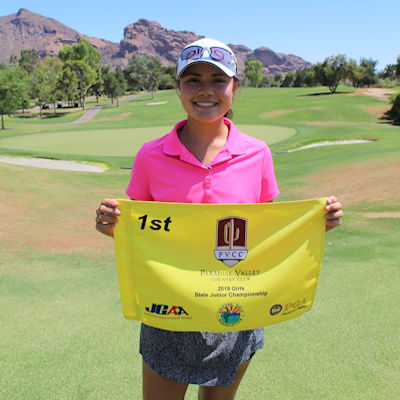 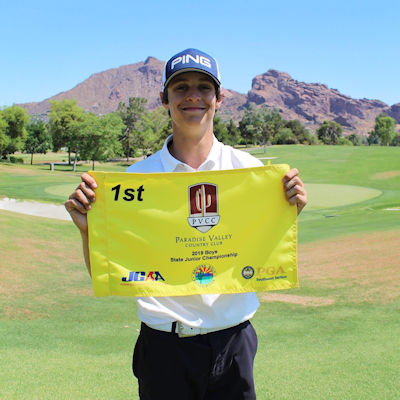 Ashley Menne of Surprise made the JGAA record book – again. She topped her own mark of three-consecutive JGAA State Junior Golf Championships with a fourth at the 2019 tournament held June 18-19 at Paradise Valley Country Club. The verbal commit to ASU posted a wire-to-wire win shooting 6-over par, 73-77—150, two strokes clear of three competitors that finished tied for second place at 8-over par, 152: Maya Benita of Tucson (77-75); Gracie McGovern (76-76) of Scottsdale; and Kendall Todd (76-76) of Goodyear.

On the boy’s side, Ben Lorenz of Peoria batted away bogeys on the first two holes of the tournament and never looked back. Verbally committed to play for the University of Oklahoma, Lorenz went on to finish the first round at 2-under-par 70 before carding a blistering, bogeyless 8-under-par 64 in the final round to finish at 10-under-par 134 for the event. Tony Hendricks of Phoenix, bound for UCLA in the fall, came in solo-second place at 3-under-par 141 (69-72). Three players finished tied for third place at 1-under-par 143, including Gilbert residents Anawin Pikulthong (72-71) and Brayden Bozak (70-73). And, defending champion, Caden Christopherson of Chandler, who is set to play in the fall for Texas Christian University, fired 71-72.