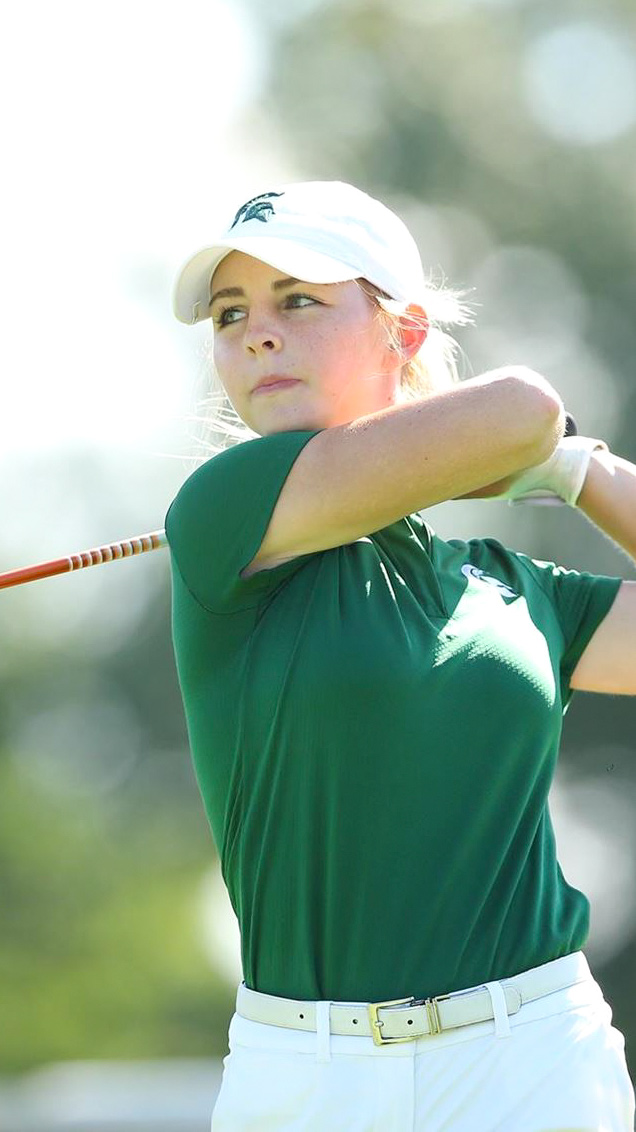 As the 2020 JGAA season resumes in Tucson next week, it seems fitting to feature a Tucsonan. Haylin Harris, who attended Salpointe Catholic High School her freshman and sophomore years, left the Old Pueblo bound for Carmel High School in Carmel, Indiana before landing in East Lansing at Michigan State University.

She immediately went to work, playing in all 11 team tournaments as a freshman in the 2018-2019 Spartan season. She placed third at the East Lansing Regional to earn a bid to the NCAA Championships where she tied for 51st at 12-over-par 231.

Harris kick-started her JGAA career in 2012 with a win in her very first tournament in the Girls 13-14 division. She followed in 2013 with two more, which happened to be at home (Tucson Conquistadores Spring Classic and Tucson City Jr Championship), before competing in 14 JGAA tournaments in 2014 in the Girls Championship division. A good year for Harris, she posted three wins as well as top-10s in all but two tournaments.

In 2015, Harris place first in the Willie Low Invitational en route to 6 of 7 top-5 finishes that year before wrapping up JGAA competition in 2016 with a third-place finish in the Tucson Conquistadores Spring Classic and T8 at the Thunderbird Invitational.

Among other accolades, Harris was ranked as the No. 3 player nationally in the 2018 class by Golfweek, reaching as high as 12th in the Golfweek/Sagarin Girls Junior Rankings and 25th in the Rolex AJGA Polo Golf Rankings.

Harris teed it up in 14 AGJA events, with two wins under her belt. She won the 2017 Davis Love Open with the help of a final round 67 and the 2017 Natural Resource Partners Bluegrass Open after a 68 in the final round. 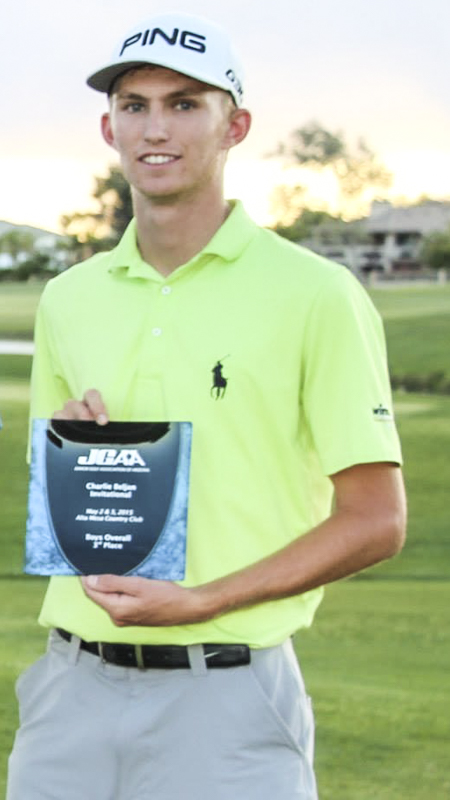 Once a Brophy Bronco, Michael Feagles became a Fighting Illini and immediately made an impact by helping the University of Illinois’ golf team reach the NCAA semifinals for the 2016-2017 season. In fact, he earned 2017 Big Ten Freshman of the Year honors for his contribution.

Feagles kept up the pace to become the Illini’s No. 1 golfer with solid play during the last three years that helped quench Illinois’ thirst for Big Ten Golf Championships. Amazingly, they have owned the top spot every year, except one, since 2009.

Feagles’ collegiate accolades are no surprise given his junior amateur career. He was a member of the JGAA from 2008 to 2015 with 60 events entered. Feagles started out in the 10 and Under division where he notched his first win. On his way to seven more, Feagles wrapped up JGAA competition in 2015 on a high note by making 4 of 4 top-10s, with a second-place finish at AM&E Classic Presented by Bryce Molder and T3 at Charlie Beljan Invitational.

That same year, Feagles earned recognition as AJGA All-American Honorable Mention due to solid play such as a third-place finish at the AJGA TPC-Southwind, second place at the AJGA Heather Farr Classic, and another strong finish at the coveted Thunderbird International Junior. Hosted by The Thunderbirds, the same group that runs the Waste Management Phoenix Open, the event is one of the most competitive junior tournaments in the world. Feagles managed to finish in ninth place in 2015 sandwiched between Viktor Hovland at T7 and Matthew Wolff at T10. Although Feagles is more than ready and willing to join Hovland and Wolff on tour, the current unusual circumstances prompted him to reconsider.

Back to Urbana – Champaign

Feagles announced he will return to Illinois for a fifth season at the University of Illinois.

“I just tried to take my time and make the best decision I could,” Feagles said in an interview with 247Sports.com. “For me, I essentially looked at where the state of professional sports are right now, and who knows when there’s gonna start up and what’s gonna happen with the pro tours? How access for guys turning pro now is going to be a lot tougher than it was supposed to be. Who knows if Q school is going to happen on some the lower tours, so it’s just a mess. For me, to have a chance to go back to a great university, get another degree, finish out there, finish my career the way I want to. Then at the end of it, pro golf is still going to be there. For me, after a while, it seemed like a no-brainer.” 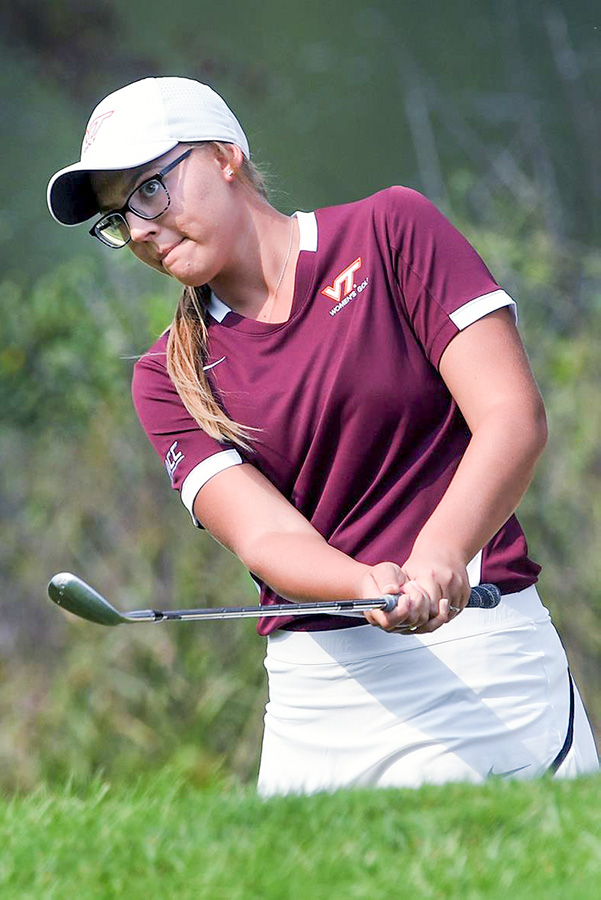 After joining the JGAA in 2012 and graduating from Xavier College Prep in 2017, Emily Mahar became a Virginia Tech Hokie. She joined the team with momentum from four consecutive Arizona state high school golf titles as a Gator, four years on the academic honor roll and numerous highlights in JGAA competition.

Shortly after landing in Arizona, the Brisbane, Australia native began competing in what would turn out to be 55 JGAA events over six seasons. She started out in the Girls 13-14 division before moving up to the Girls Championship division for the final four seasons. In the latter, Mahar managed to post 9 wins, 29 top-5s and 34 top-10 finishes in only 36 tournaments entered in the Girls Championship division.

“Emily was a great player when she competed in JGAA events, and her stellar play has continued at Virginia Tech,” said Scott McNevin, executive director of the JGAA. “When she arrived from Australia before high school, we knew she had a great chance of earning a college golf scholarship.”

Mahar punctuated her JGAA career in style with two wins. First, she captured the Phoenix City Jr Championship by a whopping eight strokes with a pair of 70s. Then, a week later Mahar won the Prescott City Junior Championship with clutch play down the stretch. She shrugged off a double bogey on the 14th with birdies on 15 and 16 before piling on an eagle at the 17th to win by one stroke with rounds of 69-67.

As a Virginia Tech Hokie, Mahar picked up her first individual title at the Princess Anne Invitational last October after firing 69-69-65—203. Her wining scores marked the first time a Virginia Tech player posted three sub-70 rounds in one event. The 65 set a new school record for the lowest single-round score, and the 203 is now the lowest three-round total in school history. All the accolades led to ACC Player of the Month honors for Mahar. She is now the Hokies’ all-time leading scorer, and her 71.00 stroke average is the Hokies’ best ever. She is currently ranked 50th on Golfstat and helped lead the Hokies to their highest-ever ranking of 21st on Golfstat. 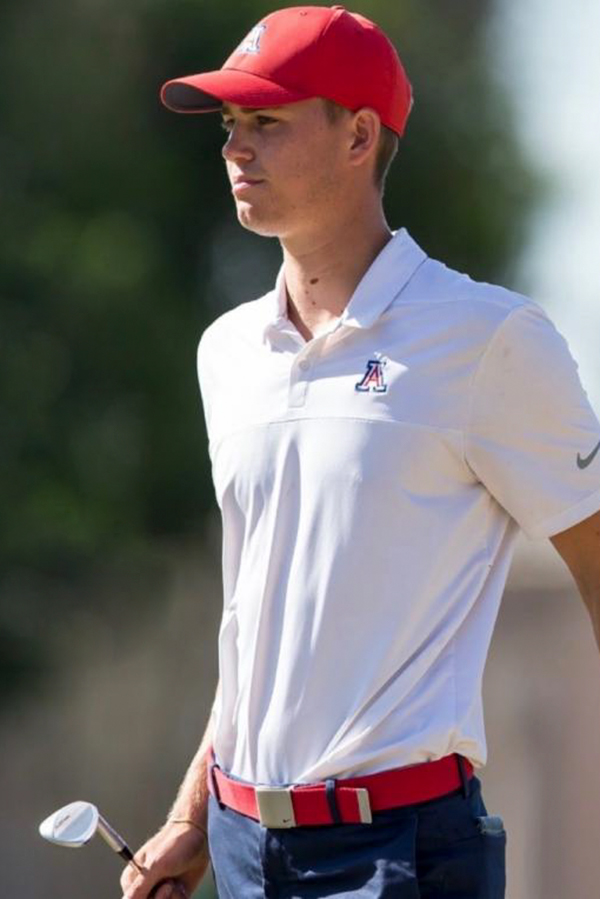 Tucson, of course. Born and raised in the Old Pueblo, Trevor Werbylo entered the JGAA Boys 11-10 age division in 2010. From there he slowly ramped up the number of JGAA tournaments entered leading to breakthrough years in 2015 and 2016.

Strong at home, he won the Tucson Conquistadores Spring Classic in 2015 to go along with six other top-10 finishes that year. Werbylo followed up the next year with two wins in Tucson at The Thompson Invitational and the Tucson City Jr Championship. He also won the Wigwam Invitational in 2016, one of the first PING Junior Masters Series tournaments.

After graduating from Salpointe Catholic High School in 2017, Werbylo naturally landed at the University of Arizona. This January he helped the Wildcats take their third-straight Arizona Intercollegiate Championship at Sewailo Golf Club.

“Trevor is an amazing player and a big part of our team’s success each week,” Jim Anderson said after the tournament. “Several guys have the ability to put the team on his back, and Trevor shoulders a ton of great golf for the Cats.”

It’s no wonder Werbylo is making waves at the college level. Prior to UA, the Arizona Republic named him as a finalist for Boys Golf Athlete of the Year honors. He made first-team All-Arizona with a 70.33 scoring average, and Werbylo claimed medalist honors at the Brophy Invitational.

Being a part of the JGAA has meant a lot to me, and even though I’m not as involved as I once was, it has given me lifelong friendships and shaped me into the person I am today. The manners and poise I possess on the golf course are all thanks to the JGAA. I learned a lot about the game through the organization, and it’s been extremely impactful on me.

I began playing in the JGAA when I was eight, and I still maintain most of the friendships I built since then. It was always great going to tournaments every weekend knowing I was going to see and possibly play with my best friends. At the end of the day that’s what this game is all about. Passion, friendship and honesty. And the JGAA has taught me nothing less than that.

No matter how well I hit it, or what the outcome was, every JGAA experience shaped my life and golf career for the better. JGAA events brought me lifelong friendships, the joy of tournament golf, and a dream to play at the highest level one day. My experience of playing the JGAA for almost exactly 10 years not only taught me how to succeed in the sport but how to become a gentleman.

The JGAA shaped my life in a way that brought me smiles. I learned proper manners, good sportsmanship, and to put things in to perspective. Not every round of golf will turn out smelling like roses but the JGAA taught me to make the best of everything. There are some people that lose interest in the sport of golf, and since I picked up my first club when I was 3 the JGAA made me love the sport even more to this day.

I started off playing Division 1 College Golf at Colorado State University and after my sophomore year I transferred and continued my division 1 college career at Grand Canyon University. I am so grateful and blessed to be back in Arizona chasing my dream to play on the PGA Tour as Lope. I’m back where it all began, where the Junior Golf Association of Arizona showed me how to succeed on and off the golf course.

Growing up playing golf in the JGAA, I was able to make lifelong friends, really elevate my golf game to play Division I college golf and develop a passion for the game of golf.

The Junior Golf Association of Arizona played a major role in my development as a competitive junior golfer, collegiate golf scholar as well as stepping stones into a 14+ year career in the Golf Industry. As a junior, I did not travel outside the state so my strong competition & competitive experience was based on the local JGAA program. The JGAA formed my idea of what an event should be, I formed lifelong friendships & it created a platform for me to stand in the industry as a professional tournament manager.

Focus, morals, vulnerability, luck, courage, endurance, winning, losing, humility, perseverance, playing by the rules, and shaking hands on the last green no matter what. These things come to mind when I recall my years competing in the JGAA – and the lessons learned that live with me every day. Junior golf played a large part in my self-discovery – identifying and fostering character traits that help me invest in career decisions that led to where I am today. The JGAA just gets it when it comes to fostering the sport we all loved as junior golfers, and continue to love for a lifetime. Regardless of where we have ended up, all of us who have competed in JGAA events are indebted to the staff, sponsors, volunteers, host facilities, and parents who have invested in the importance of junior golf in Arizona.