Tucson’s Jonathan Walters fired 76-69, including nine birdies, in the final two rounds to edge Gilbert’s Ali Hameed by two strokes. He finished the tournament with a two-under-par 208. In only his third JGAA tournament appearance, he adds this win to a fourth-place finish at the Yuma City Junior Championship, and a T13 at the Tucson City Jr Championship-Tucson Conquistadores.

In the Girls Champion Division, Scottsdale’s Ocean Pangan posted a two-under-par 70 (girl’s low round of the event) in the final round to pass up second-place finisher Megan Knadler by three strokes. Pangan finished the 54-hole tournament at 76-74-70—220. 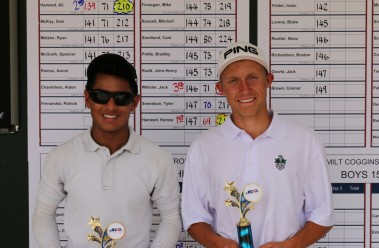 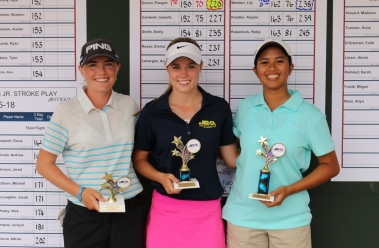 The younger divisions competed at Papago Golf Course where Surprise’s John Menne win in the Boys 13-14 Division, and his sister Ashley won in the Girls Division. Mahanth Chirravuri of Chandler took the top spot in the Boys 11-12 Division, and Lauren Garcia of Gilbert won on the Girl’s side. Charlie Palmer of Phoenix and Abbey Schutte of Goodyear won in the 10-and-under Divisions.

Tournament sponsor, The Antigua Group, Inc. is a leading designer and marketer of men’s, women’s and children’s lifestyle apparel and sportswear under the distinctive Antigua label. In 2009, Antigua celebrated its 30th Anniversary serving the apparel needs of the Golf, Licensed Sports, Corporate and identity Specialty Retail markets.

Thank you to Antigua for sponsoring this wonderful event.