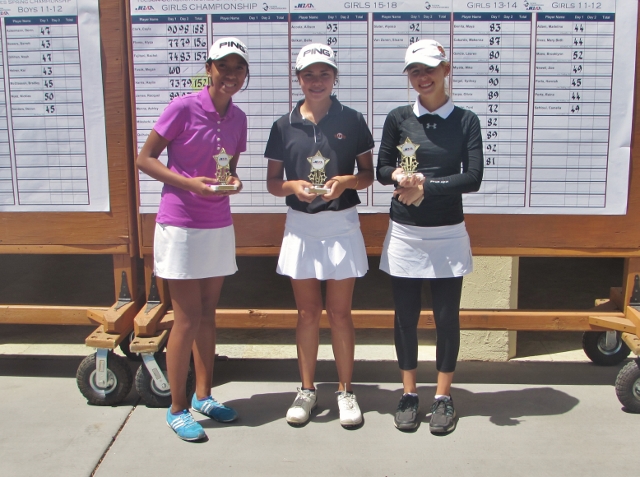 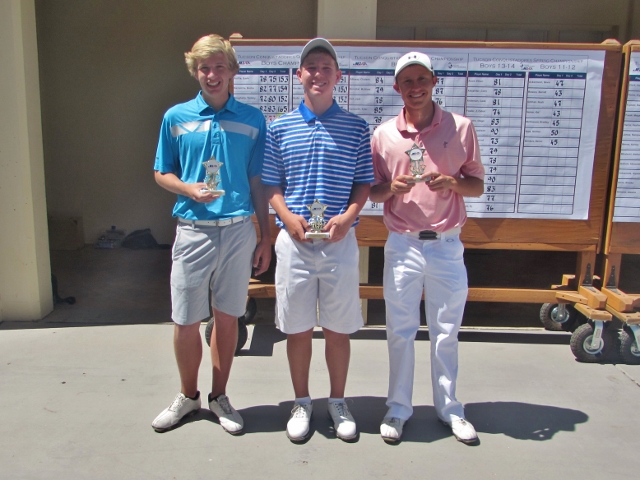 Tucson resident Jonathan Walters and Ashley Menne of Surprise placed first in the Boys and Girls Championship Divisions respectively at the 24th annual Tucson Conquistadores Spring Classic held April 16-17. Walters finished at two-under par for the tournament with a steady 70-71—141 performance, three strokes ahead of second-place finisher and Tucson resident, Jacob Goode 72-72—144. Walters adds the win to a T10 finish in March at the Thunderbird Invitational, and a T2 finish at the AM&E Classic hosted by Bryce Molder in early April. Both are Junior Masters Series events. Tyler Svendson of Phoenix, the eventual third-place finisher, posted the low round for the tournament in round one, 69, followed by 78 to finish six shots off the pace.


In the Girls Division, first-place finisher, Ashley Menne, fired a three-over-par 71-75—146 to win by four strokes over San Tan Valley resident, Alyzzah Vakasiuola (70-80—150). Haylin Harris of Tucson finished in sole possession of third place at 73-79—152. Although Menne, 14, lives in Surprise it was anything but a surprise to see her in the winner’s circle. In the seven tournaments she has entered so far this season, she has finished in sixth place or better punctuated by two wins in Junior Masters Series events: the Wigwam Invitational in January and the BMO Invitational in February.

“Congratulations to Jonathan and Ashley. They came out on top of a very competitive field under breezy conditions,” said Scott McNevin, Executive Director of the JGAA. “As always, we truly appreciate the Conquistadores and everything they do, as well as the hospitality of Silverbell Golf Course and Tucson National.”

In addition to the Championship Divisions, four other divisions (Boys and Girls) also competed. Max Schwarz of Paradise Valley won the Boys 15-18 Division; Jarrod Johnson of Marana won the Boys 13-14 Division; Devon Sanders of Buckeye won the Boys 11-12 Division; and Ian Christoffersen of Phoenix won the Boys 10 and Under Division.

The Tucson Conquistadores Spring Classic, one of the annual highlights on the JGAA’s schedule, teed off for the 24th time April 16-17 featuring 129 of Arizona’s best junior golfers (boys and girls) ages 8-18 competing in the tournament. Silverbell Golf Course hosted Saturday’s round, and Tucson National Golf Resort (Catalina Course) hosted the final round on Sunday.