Gilbert’s Trevor Lampson set the pace for a wire-to-wire victory with an opening-round, 3-under-par 69 on his way to a 4-under-par 140 finish for the 36-hole Charlie Beljan Invitational held at Alta Mesa Golf Club May 2-3. He edged out Gavin Cohen of Tucson by a stroke in a top-heavy final leaderboard with seven players finishing three strokes or less off the lead.

Lampson, a senior at Valley Christian High School who will be attending California Baptist University in the fall, had 12 birdies during the championship, including seven in his final round. His birdie on the 564-yard, par-5 18th helped seal his victory. Lampson finished 5th earlier this year in the Phoenix Metro Junior Championship.

Cohen, who is a sophomore at Catalina Foothills High School, had seven birdies in his final-round 66. Four consecutive birdies on holes 10-13 helped kick start his 5-under-par 31 on the back nine. His best finish this year prior to the Charlie Beljan Invitational was 2nd place in the Phoenix Metro Junior Championship. 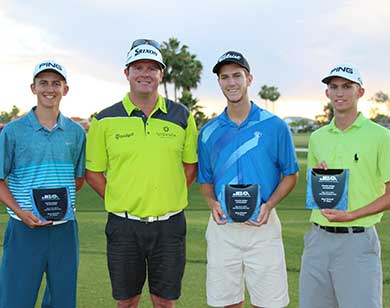 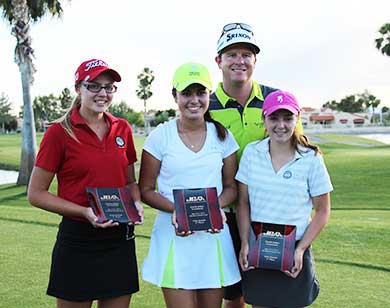 CLICK HERE for all of the PHOTOS of the Charlie Beljan Invitational!

With her latest first-place finish in the Girls Division, Emily Mahar of Scottsdale won the first two of six JGAA Junior Masters Series events this season (the first came in March at the AM&E Classic Presented by Bryce Molder). In Mahar’s final round she shot a 2-under-par 34 on the back nine including birdies on the 10 and 13. These turned out to be critical to her one-stroke victory over Madison Kerley, 17 of Scottsdale and Samantha Sandland, 17 of Phoenix, who both fired identical rounds of 76-74–150. Mahar, a 15-year-old Xavier College Prep student, also finished T3 in both the Thunderbird Invitational, the Desert Mashie Spring Championship, and fourth in the Tucson Conquistadores Spring Classic.

“Congratulations to Trevor and Emily,” said Scott McNevin, Executive Director of the JGAA. “Charlie’s participation in the event really resulted in a great experience for our players. Thank you to him, Alta Mesa and everybody who made this Junior Masters Series tournament a success.”

The Charlie Beljan Invitational is the second of six Junior Masters Series tournaments that are tailored to Arizona junior golfers with the desire and ability to compete locally against their top-ranked peers. The field for the event was made up of 72 players who were invited to compete by virtue of their national ranking by Junior Golf Scoreboard – boys must be in the top 3,000 and girls in the top 1,500. Beljan joined another local professional golfer, Bryce Molder, as high-profile tournament ambassadors for the newly created Junior Master Series. The next Junior Masters Series event will be the Willie Low Invitational presented by MJ Insurance at Phoenix Country Club on June 8-9.

“It was my pleasure to partner with the JGAA to host an event at my home course at Alta Mesa Golf Club,” said Beljan. “Our goal is to have the best Arizona junior golfers compete locally and on a championship course.”

Openings for junior players from neighboring states will be dependent on availability at each event. Qualified junior players can sign up for the Junior Major Series by visiting www.jgaa.org. To learn more about the JGAA and the Junior Masters Series, contact Scott McNevin, JGAA Executive Director, smcnevin@jgaa.org, 602-944-6168.