Preston Summerhays, 15 of Scottsdale, became the youngest winner of the Utah State Amateur after closing out University of Utah golfer, Kyler Dunkle, 3-and-2 for the victory on Saturday, June 16.

“Honestly, I got over the putt and I just wanted to drain it,” Summerhays said in an interview with the Salt Lake Tribune about the winning 10-footer on the par-5 16th hole. “There’s nothing else I wanted more.” 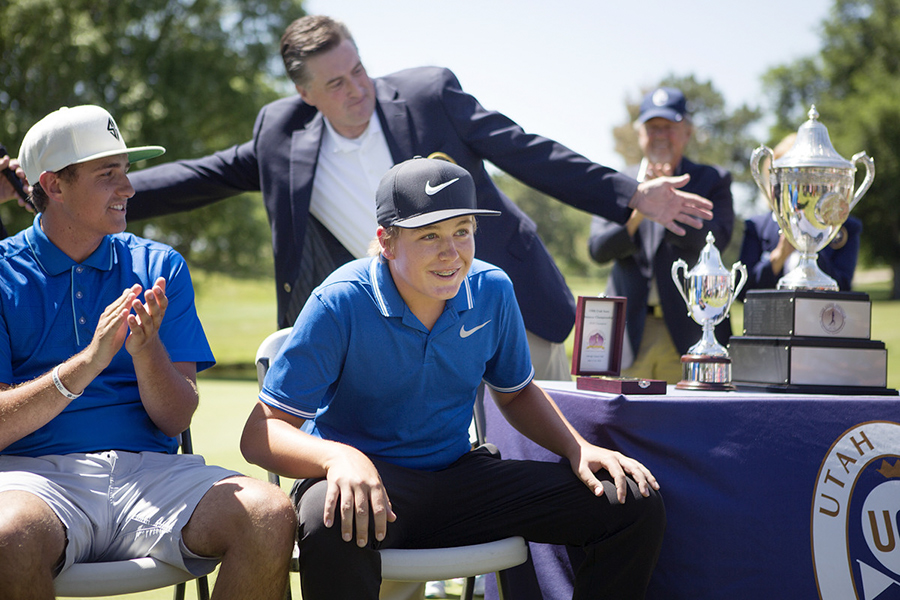 Until that point, Summerhays’ win was anything but certain. Dunkle was outdriving him all day as well as knocking the ball closer to the hole on most occasions during the 36-hole match. However, Summerhays’ putter was hot and Dunkle’s was not.

“It was a really tough day for me on the greens,” Dunkle was quoted to say in the Deseret News. “I don’t know if I can count on both hands how many times I lipped out putts today. That’s tough when you have an opponent who’s making putts from everywhere. He made all the putts he should have made and made some pretty long ones. Preston might be one of the best young putters I’ve ever seen in my life.”

After the handshake, Summerhays became the youngest Utah State Amateur champion since George Von Elm in 1917 – 101 years ago. Coincidentally, his uncle Daniel earned second-youngest honors in 2000.

Preston’s father and Daniel’s brother, Boyd, who happens to also coach tour star Tony Finau had to hop on a plane Friday night to witness his son’s victory the next day before returning to the U.S. Open to watch Finau notch fifth place at Shinnecock Hills.