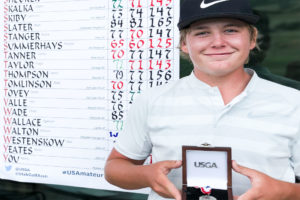 Scottsdale, Arizona’s Preston Summerhays, 15 – fresh from becoming the youngest champion of the Utah State Amateur in tournament history one month ago – fired 65-60 to qualify with ease for the U.S. Amateur to be contested August 13-19 at Pebble Beach Golf Links and Spyglass Hills Golf Course in Pebble Beach, California.

One of the highlights of the qualifier for Summerhays came in the first round on Soldier Hollow Golf Course’s 6th hole, a 588-yard par 5 where he made an eagle-3. Add birdies on holes 7, 9, 10 and 11, and he went 6-under par for the six-hole stretch from 6 to 11. He also made birdies on the 17th and 18th holes for good measure.

“My dad was my caddie and we just tried to make as many birdies as possible,” he said.

As good as the first round was, the second was a record breaker. Summerhays made seven birdies on the front nine to shoot 7-under-par 29. And on the way in, he picked up three more birdies and an eagle-2 on the 404-yard, par-4 14th hole to post a 12-under-par 60 – a course record by two strokes.

“To make things interesting, they moved the tee up on the 14th hole for the second round to make a reachable par 4,” said Summerhays. “I hit a good shot that ended up just right of the green. Then I hit a high, soft pitch that bounced a couple times and went in.”

Moreover, if his approach into the green on the 36th hole released a few more inches, he would have posted a 59.

“I had 53 yards into the green on No. 18, and hit what I thought was a great shot. You could see by the reaction of the spectators that it was really good – it was three inches short, in the heart of the hole.”

Another recent accomplishment for Summerhays came at the 2018 IMG Academy Junior World Championship held July 9-13 in San Diego on Torrey Pines South Course where he posted a third-place finish at 2-under-par 286 (74-72-70-70), two strokes off the pace in the Boy’s 15-18 division.

In local play at on the Junior Golf Association of Arizona’s schedule, Summerhays has been active since beginning in the Boys 10 and Under division in 2012. More recently, he notched two victories in six events entered in the 2018 season.