Mason Andersen edged out fellow Gilbert resident, Branden Meyer, in a playoff to place first in the Boys Championship Division with a three-under-par 141 (71-70) final score. Amazingly, Andersen posted seven birdies and no bogies on the last 10 holes cumulatively over both rounds.

In the Girls Championship Division, Lauren Metcalf made the best of her home-town advantage by coming out on top in a playoff against Gilbert resident, Megan Ohland. She ended regulation play at five-over-par 149. This was only her third start in the JGAA’s Girls Championship Division. Metcalf adds this win to another at the 2015 New Year’s Shootout, and a second-place finish in the Phoenix Metro, both in the Girls 13-14 Division. And in 2014, she won three times and placed second four times in only seven events played that year. 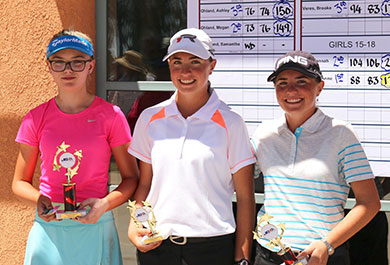 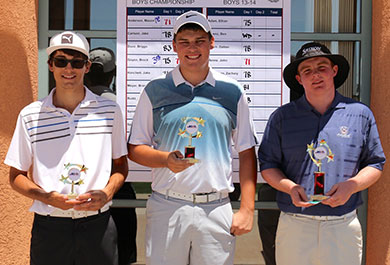 ALL PHOTOS of the YUMA CITY JUNIOR CHAMPIONSHIP

The event is played annually at Yuma’s Desert Hills Golf Course. And after the recent passing of the long-time general manager, Bruce Brown, his wife Laura Brown and the JGAA established the Bruce Brown Memorial Scholarship in his name to award significant scholarship funds toward JGAA entry fees to deserving JGAA players. This year’s recipients included Mary Beth Doss, Zachary Missigman, and Yuma’s own Alexandria Schmunk and Luis Ramirez.

“Once again the Yuma City Junior Championship turned out great,” said Scott McNevin, Executive Director of the JGAA. “The competition was pretty tight out there with several playoff needed to decide the champions. We truly appreciate the support from the community and our gracious sponsors.”

To make a donation to help fund the future Bruce Brown Memorial Scholarships click the button below.