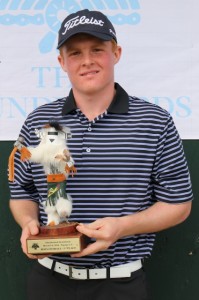 Chandler’s Mason Andersen took top honors at the 22nd-annual Thunderbird Invitational, a Junior Masters Series tournament on the JGAA’s calendar of events. He posted a 10-under-par 134 (68-66) that featured a 32 on the front nine in the first round and a 31 on the back nine in the second round. Andersen finished five strokes clear of three players tied for second place: Davis Evans of Phoenix (74-65—139); Gavin Cohen of Tucson (69-70—139); and Briggs Duce of Tucson (68-71—139). Andersen adds this win to a third-place finish at the BMO Invitational in February, the second Junior Masters Series event of the 2016 season. In 2015, he notched two victories at Yuma City Junior Championship and Tucson City Jr Championship-Tucson Conquistadores. 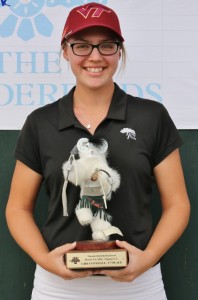 On the girl’s side, Emily Mahar (69-70—139) of Scottsdale finished four strokes ahead of Phoenix’s Alisa Snyder (71-72-143), who was defending her title at the Thunderbird Invitational. Ashley Menne of Surprise came in third place (70-74—144). Mahar’s victory is her third in a row after posting wins at the New Year’s Shootout in January and the Phoenix Metro Jr. Championship in February. And she came close to a win at the first Junior Masters Series event of 2016 with a T2 at the Wigwam Invitational. Mahar appears to be continuing her stellar play from 2015 when she won four times and placed in the top 10 in all seven events she entered.
“Congratulations to Emily and Mason,” said Scott McNevin, Executive Director of the JGAA. “As a Junior Masters Series event and one of the longest-running tournaments in The Valley, the Thunderbird Invitational is definitely one of the most coveted events of the season.”