In the Girls Division, Ironwood Ridge High School’s Sydney Colwill fired a two-over-par 74 to win by five strokes over nearest competitor, Christina Ressa. A Tucson resident, Colwill adds this victory to another she earned in mid-April at the Tucson Conquistadores Spring Classic. Before that, she narrowly missed the winner’s circle at the Thunderbird Invitational with a second-place finish. 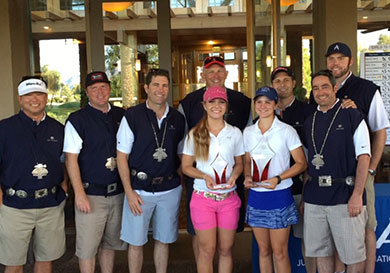 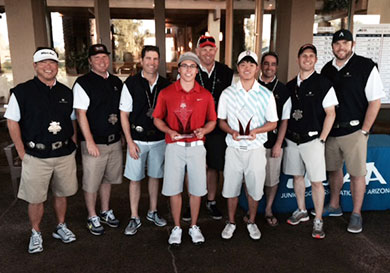 “This event is just a fun way to say farewell to our junior golfers who, in many cases, have been playing in JGAA events with us since they were in grade school,” said Scott McNevin, Executive Director of the JGAA. “It’s more of a casual atmosphere that allows the players to have a little fun as their high school golf careers wind down and, in most cases, their college careers kick up.”

Conducted the Junior Golf Association of Arizona (JGAA), the Thunderbird High School Senior Classic featured a field of 69 seniors (57 boys and 12 girls) from 42 different high schools state-wide who competed on their respective golf teams during the 2014-2015 season.

Many of the participants will be attending college this fall on golf scholarships. For example, Basha High’s Megan Liborio signed with Colorado Mesa University. Riley Corona from Notre Dame Prep signed with William & Mary, and Girls’ Champion Sydney Colwill signed with the University of Memphis.

Lauren Blumears, a proud member of the Pride golf team at Mountain Pointe High School in Ahwatukee, is off to Las Cruces to attend New Mexico State University this fall. She will be playing golf for the Aggies and certainly is no stranger to fierce competition. Lauren played in nine JGAA tournaments last season and finished in the top-ten seven times, including two, T3 finishes and a win at the Tucson Conquistadores Spring Championship. When asked about her favorite part of the game, she said, “It is all down to you, you decide how much to prepare and it reflects in your game.”