Tucson residents Trevor Werbylo and Sydney Colwill placed first in the Boys and Girls Championship Divisions respectively at the 23rd annual Tucson Conquistadores Spring Classic held April 18-19. Werbylo finished even par for the tournament improving on a first-round, one-over-par 71 with a second-round, one-under-par 72 (par 73). Werbylo’s 143 total score was good enough to edge out Colton Gage of Vail, Ariz. and Cam Sandland of Phoenix who finished T2, one stroke behind the pace. Werbylo adds this win to his T9 finish at the Thunderbird Invitational in March. The 16-year-old sophomore at Salpointe Catholic High School also notched two, top-10 finishes last season including runner-up at The Thompson Invitational. CLICK HERE for full results of the event. CHECK OUT ALL PHOTOS FROM THE TOURNEY! 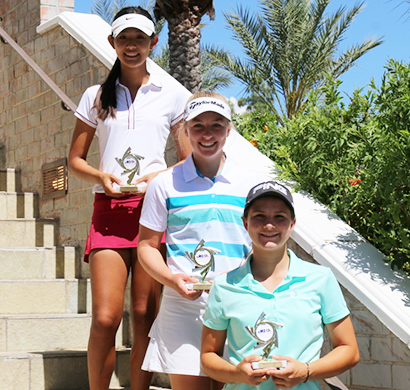 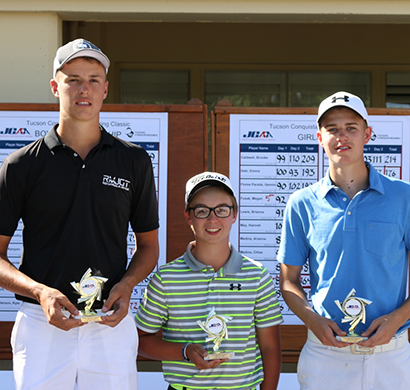 In the Girls Division, Colwill finished the first round at Silverbell Golf Course with a five-over-par 75. She would right the ship the next day in dramatic fashion with a three-under-par 70 at Tucson National’s Catalina Course, carding four birdies, three bogeys and an eagle along the way. She finished two strokes clear of Scottsdale’s Elizabeth Caldarelli who also finished strong after a rocky first round 77 with a final-round, three-under 70. Colwill, an 18-years-old senior at Ironwood Ridge High School, played in two events this season with her best result coming in the Thunderbird Invitational where she finished in second place. Last year, she notched five, top-5 finishes that included two wins – the Tucson City Jr. Championship and the AZ Jr. Match Play Championship. Colwill has signed a National Letter of Intent to play for Memphis next fall.

“Thanks to the hard work of the Tucson Conquistadores, this year’s tournament was another great success,” said Scott McNevin, Executive Director of the JGAA. “As always, the juniors found a way to play some impressive golf while still having a lot of fun out there. We truly appreciate everybody’s hard work as well as the hospitality of Silverbell Golf Course and Tucson National.”

The Tucson Conquistadores Spring Classic, one of the annual highlights on the JGAA’s schedule, teed off for the 23rd time April 18-19 featuring 117 of Arizona’s best junior golfers (boys and girls) ages 8-18 competing in the tournament. Silverbell Golf Course hosted Saturday’s round, and Tucson National Golf Resort (Catalina Course) hosted the final round on Sunday.

Since its inception in 1962, the Tucson Conquistadores civic group has raised $29 million for young athletes. The group has an active membership of 200 business and professional men who represent a cross-section of the Tucson community.