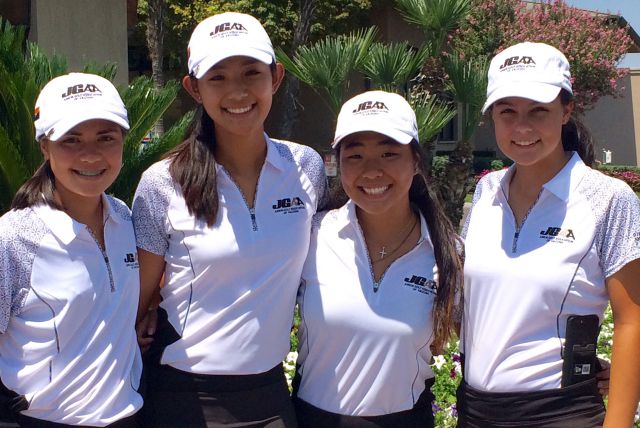 The girls team representing Arizona notched a third-place finish in the 2016 Girls Junior America’s Cup held July 24-28 at Del Rio Club in Modesto, California. It was the best finish for the Arizona girls’ team in 9 years. They shot 223-227-227—677 (29-over par) for the tournament where the best three individual scores of each four-person team represented their team score. Ashley Menne of Surprise led the girls’ team – made up of Kelly Su of Scottsdale, Breyana Matthews of Scottsdale, and Rachel Fujitani of Chandler – with a T5 individual performance (73-78-72—223). The Southern California Girls’ Team placed first with a team score of 659 (11-over par), and Mexico came in second with a team score of 674 (26-over par). Click here for complete final standings.

“Congratulation to the girls. They played well under pressure against 17 other very talented teams,” said Scott McNevin, executive director of the Junior Golf Association of Arizona (JGAA). “And, bravo to Ashley for continuing the type of excellent play we’ve witnessed all season in local JGAA events.”

The boys’ team from Arizona – made up of Tucson’s Jonathan Walters, Tony Hendricks of Phoenix, Hayden Sayre of Phoenix and Alejandro de Zavala of Phoenix – placed 12th in the 2016 Junior America’s Cup, held at Guadalajara Country Club, in Guadalajara, Mexico with a team score of 12-over-par 660. Individually, Hendricks led the team by finishing T19 (73-71-74—218). Click here for complete final standings.

About the Junior America’s Cup

The Girls Junior America’s Cup is a non-profit organization established in 1978 under the leadership of Joan Teats with a mission to provide a premier international team-golf tournament that encourages sportsmanship, friendship, personal growth and development of young women golfers. The event began with 11 teams in 1978 that grew into 18 teams by 1991. Each team consists of the top four girls from each state/country that exemplify not only outstanding skill and experience, but also true sportsmanship, discipline, courtesy and strength of character. The tournament is a 54-hole competition with teams counting three scores and throwing out the team’s highest score. The event also includes a practice round, opening and closing ceremonies, a tournament banquet and a social event. Being chosen to represent your state/country to play in the Girls Junior America’s Cup is one of the highest honors in girls junior golf. To learn more, visit http://gjac.org.

The Boys Junior America’s Cup first started in 1959 as matches between Mexico, Alberta and the Southern California Junior Golf Associations with each association hosting the event every three years. Since 2001, the competition annually brings together an elite international field of 18, four-player teams featuring the top boys representing 12 western states, two Canadian provinces and Mexico. To learn more about the Junior America’s Cup, visit http://www.junioramericascup.net.