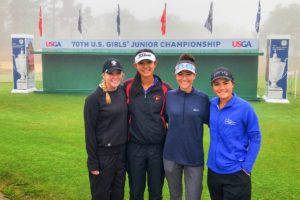 Ashley Menne of Surprise, Elizabeth Caldarelli, Kelly Su, and Bailee Tayles, all of Scottsdale, are set to compete in the U.S. Girls’ Junior Championship this week July 16-21 at Poppy Hills Golf Course in Pebble Beach, California.

This marks the fourth consecutive appearance in the U.S. Girls’ Junior for Su who made it to the round of 64 in 2015, stroke play in 2016 and round of 32 in 2017. Menne will compete for the third year in a row after exiting the tournament in stroke play in 2016 and making it to the round of 32 in 2017. Caldarelli enters the field following her freshman year on the golf team at Texas A&M (18-year-old collegiate players are permitted to play). The tournament will be televised on Fox Sports 1 on 7/20 and 7/21.

Samuel Salisbury of Green Valley and Cameron Barzekoff of Mesa will be the Arizona boys to represent the state at the U.S. Junior Amateur Championship to be held at Baltusrol Golf Club, Springfield, N.J. July 15-21. Salisbury qualified after prevailing on the second playoff hole over three players tied at 68 to earn the third and final spot into the championship. The tournament will be televised on Fox Sports 1 on 7/20 and 7/21.