The 36th annual Desert Mashie Spring Championship teed off at Encanto Golf Course March 12-13. Hosted by the Junior Golf Association of Arizona (JGAA), the field featured 195 junior golfers – boys and girls – ages 8-18 competing in five age groups.
In the Boys Championship Division, Tyler Blohm of Tucson came in first place, five strokes ahead of three players who finished tied for second place: Daniel Thompson of Phoenix (73-67—140); John-Henry Rudd of Peoria (72-68—140); and Mike Finnegan of San Tan Valley (71-69—140).
Blohm started out hot with seven birdies and two bogeys on his way to a first-round 65, the lowest round of the tournament in the Boys Championship Division, which played the golf course as a par-70. He followed up with an even-par 70 the next day to finish at five-under-par 135 for the tournament. 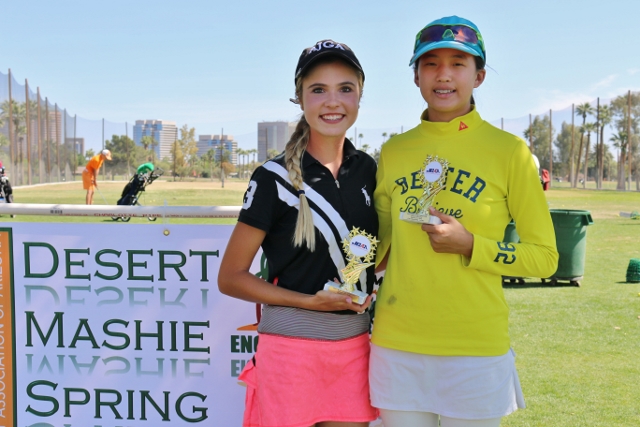 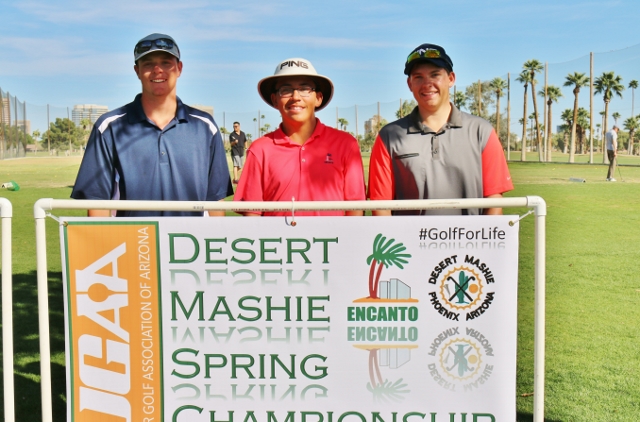 Jenny Bae of Chandler won the Girls Championship Division with a three-under-par performance on the par-72 golf course (71-70—141). She finished three strokes clear of Scottsdale’s Isabella Cantwell (70-74—144), who came in sole-second place at even par. Alyzzah Vakasiuola of San Tan Valley, Ashley Menne of Surprise, and Grace Balkan of Mesa finished tied for third place at nine-over par.

Ben Lorenz of Peoria won the Boys 15-18 Division at 2-over par (72-70—142). Dominic Wade of Scottsdale won the Boys 13-14 Division at 2-under par (73-68—141). Johnnie Clark of Mesa took top honors in the Boys 11-12 Division at 4-under par (60-56—116), and Tanner Boehm from Scottsdale won the Boys 10 and Under Division at 5-over par (33-32—65).
Isabella Larson of Scottsdale won in the Girls 15-18 Division at 12-over par (80-76—156). Katie Stinchcomb of Cave Creek won the Girls 13-14 Division at 13-over par (80-77—157). Ivy Song of Peoria won the Girls 11-12 Division at 12-over par (67-65—132), and Paige Hammarstrom won in the Girls 10 and Under Division at 10-over par (38-32—70).
“The Desert Mashie is one of the oldest and most celebrated junior events in Arizona,” said Scott McNevin, Executive Director of the JGAA. “It’s an honor for us to carry on the tradition of this tournament started by a group of people with a common passion for golf and the desire to see more kids grow up with the game.”
The Desert Mashie Golf Club – formed by a group of Phoenix-area golf enthusiasts in 1946 – first held the Desert Mashie Spring Championship in 1981 at Encanto Golf Course, and it became a JGAA-sanctioned event in 1992. The founding fathers of the club were Dr. Thomas A. Crump, Aubrey C. Aldridge, Earl Le Near, Earnest S. Bartlett, Dr. Lowell C. Wormley, Curtis “Dock” Earl, William Robbie” Robinson, Ray Mercado and Densil Perdue. Today the Desert Mashie is the oldest public golf club in Arizona.