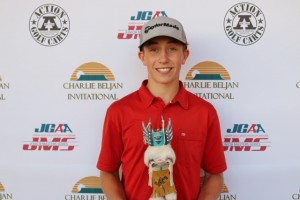 Tony Hendricks of Phoenix came away with a two-shot victory after shooting a two-over-par 75-71—146 at the Charlie Beljan Invitational, a JGAA Junior Masters Series tournament held at Alta Mesa Golf Club April 30 – May 1. Brock Goyen (79-69) of Gilbert finished tied for second place with Hayden Sayre (78-70) of Phoenix at 148. Goyen’s second-round three-under-par 69 was the low round of the tournament after strong winds inflated round-one scores.

On the girl’s side, Ashely Menne of Surprise continues her exceptional play with her third victory of the season, all of which came during Junior Masters Series events. In all eight tournaments she has entered so far this season, Menne has finished in sixth place or better. Tucson’s Alexandra Quihuis and Chandler’s Jenny Bae finished tied for second place after shooting identical scores of 76-79—155 to post 11-over-par for the tournament. 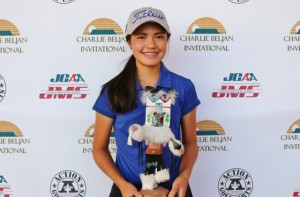 “Congratulations to Tony and Ashley,” said Scott McNevin, Executive Director of the JGAA. “Charlie’s participation in the event really resulted in a great experience for our players. Thank you to him, Alta Mesa, Action Golf Carts and everybody who made this Junior Masters Series tournament a success.”

The Charlie Beljan Invitational is the fifth of seven Junior Masters Series tournaments that are tailored to Arizona junior golfers with the desire and ability to compete locally against their top-ranked peers. The field for the event was made up of 72 players who were invited to compete by virtue of their national ranking by Junior Golf Scoreboard – boys must be in the top 3,500 and girls in the top 1,500. Beljan joined another local professional golfer, Bryce Molder, as high-profile tournament ambassadors for the Junior Master Series, currently in its second season. The next Junior Masters Series event will be the Willie Low Invitational presented by MJ Insurance at Phoenix Country Club on June 6-7.