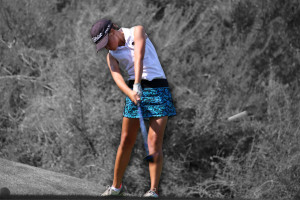 Surprise resident Ashley Menne sounded a bit surprised after finishing round one of the ACDS / Ryan Moore Junior at 6-under-par 64 – the low round of the tournament on the girls side. The 15-year-old eagled the par-4 eighth hole and bagged six more birdies to take an early 4-stroke lead at the event played at Oakbrook Golf Club in Lakewood, Washington July 3-6.

“I was not expecting this (leading) at all,” Menne said. “I went out there with no expectations and just tried to play my best. I eagled hole No. 8 and that was shocking, it was great. I made a lot of putts today and hit it close. I didn’t make too many mistakes today.”

In the second round, Menne shot 2-under-par 68 to stay atop the leaderboard by seven strokes with a relatively straightforward performance featuring four birdies and two bogies.

The final round started out a bit rocky for Menne with three bogies in the first five holes before she caught fire with three birdies over the next four holes to make the turn at even par.

Menne then closed the door on her fellow competitors with a tournament-defining ace at the par-3 13th hole followed by a birdie on the very next hole. After going three-under par for these two holes, she cruised to victory with an even-par 70 (64-68-70—202, -8).

In early June, she finished T3 in the Azahara Munoz Championship by Transamerica played locally at ASU Karsten along with a T13 in April at Longbow during the PING Heather Farr Classic. She nearly captured the Tathata Golf Junior All-Star Championship in January before eventually finishing in second place. Since July of last year Menne notched five top-10 finishes in 12 tournaments entered on the AJGA circuit.

Menne recently qualified to play in the upcoming U.S. Girls’ Junior after finishing co-medalists at the qualifier held at Alta Mesa Golf Club on June 26. This marked the second consecutive year that Menne will compete in this prestigious USGA event to be held at Boone Valley Golf Club, Augusta, Missouri July 24-29.

In 2016, Menne won 12 times in 21 starts with five second-place finishes, three third place, one fourth and one sixth (her worst finish of the entire season). In 2017, she finished in first place 11 times in 16 events played, so far, including three Junior Masters Series events and the State Junior Golf Championship.