Team Arizona is made up of Phoenix residents Daniel Thompson and Davis Evans joined by Jonathan Walters of Tucson and Cameron Barzekoff of Mesa. The four players were selected by virtue of their top-4 status on the JGAA’s Player of the Year points ranking. They will compete in a 54-hole format where their three lowest scores will determine the team score. All players also will be competing for the Sally Pini award recognizing the individual medalist. 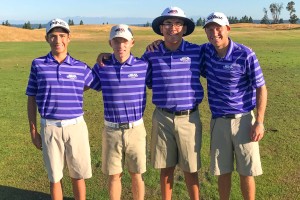 Jonathan Walters, 18, makes his second consecutive appearance at the Junior America’s Cup as the current Player of the Year points leader. So far this season, he has notched two wins at the Thunderbird Junior Classic in June and the Tucson Spring Classic in April. Walters also came in second place four times with 12 top-10 finishes in 16 starts this season.

Cameron Barzekoff, 17, holds the second spot with two wins under his belt including the New Year’s Classic in January and the BMO Invitational (a Junior Masters Series tournament) in February. Barzekoff also made the top 10 in seven of 10 events entered in 2017.

Daniel Thompson, the youngest player on the team at 14, has been one of the most active members of the JGAA dating back to 2009 as a 7-year-old. He has played all but two tournaments in the Boys Championship Division this season with a win at the Junior Masters Series event, the Charlie Beljan Invitational, and a third-place finish in a strong field at the Azahara Munoz Championship by Transamerica. Overall, he has notched eight top-10 finishes in 16 tournaments entered.

Davis Evans, 17, posted a victory in his first tournament of the year in January at the Wigwam Invitational, a Junior Masters Series event. Since then, he has gone on to place in the top 10 in all but two of the 10 tournaments he has entered so far this season.