AM&E Classic presented by Bryce Molder Kicks Off this Weekend

FOURTH JUNIOR MASTERS SERIES EVENT OF THE SEASON TO BE HELD AT MOON VALLEY COUNTRY CLUB. 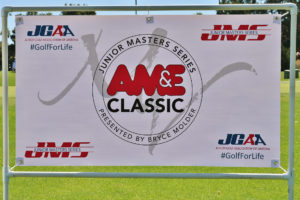 The Junior Golf Association of Arizona (JGAA) will host the AM&E Classic – Bryce Molder teeing off at Moon Valley Country Club March 24-25. The field will feature 72 players (48 boys and 24 girls) ranging in age from 13-18 competing in the fourth Junior Masters Series tournament on the JGAA schedule of events. Tee times for Saturday will begin at 12:15 pm each day with an awards ceremony following play.

As the name suggests, Scottsdale resident and PGA TOUR player, Bryce Molder, supports the event each year. The Georgia Tech grad and two-time Walker Cup team member posted a win on the PGA TOUR at the Frys.com Open in 2011 on the way to earning nearly $12 million since joining the tour in 2002.

“Bryce Molder’s participation in the tournament really gives it a boost,” said Scott McNevin, Executive Director of the JGAA. “As an avid junior golfers in his early years, Bryce is able to relate to and inspire our juniors in a very meaningful way. His participation alongside the support from AM&E sets the stage for another exciting event.”

The field is made up of the JGAA’s Boys and Girls Championship Divisions (FULL FIELD) who were invited to compete by virtue of their national ranking on Junior Golf Scoreboard – boys must be in the top 3,500 and girls in the top 1,500.